Excuse Chits From Train Breakdown Shows Who are the Dumber

Train services has broken down for 3rd day in a row with the 3rd on the new circle line. Another nail in the coffin to the myth that higher fares = better services.

I find it stupid that the train company issues these excuse chits for people to prove why they are late for work/school etc. The boss/supervisor ought to be a dumbass requiring excuse chit as proof when news of breakdown are all over the media & on the train company website.

If a person has such dumbass boss/supervisor it is better to think about 'moving on' as there isn't much future working under such superior. 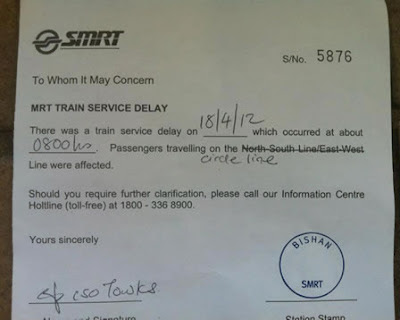 Those folks who collected excuse chits are coward bunch who waste time queing in line to obtain such chits to prove why they didn't clock in at the necessary time for work/school when news are all over the media. Such people tend to be the first in the firing line during layoffs.