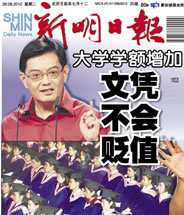 Many working sinkies with degrees already know their paper certs have degenerated into toilet paper when the floodgates are opened widely & workers with unknown paper certs(incl. Drs) from 3rd world countries can get hired & displaced locals.

"I've worked really hard to get all these qualifications, though... the thing is, there are too many people like me & too few jobs for us. If I have children, I'll never press them to go to college/Uni like my parents did. I'll tell them to find their real passion first instead of just following the pack."-23 year old Korean grad

Similar fate already happening & will continue in S'pore. Many youngsters being young have no idea of what they want. Coupled with pressure from parents & the herd, many just go along blindly. In paper-crazed societies many parents want their kids to be Drs/Lawyers so as to have 'face'- Watch Rich Son Poor Son

President Lee even proposed setting a hiring quota at government bodies for high-school graduates -- a measure intended to encourage more teenagers to seek work after school ends, instead of heading straight for college with no clear goal.
Given the dismay statistic, one has to question the ROI (return on investment). What's the returns after getting into a pile of debts & then facing a bleak prospects upon graduation? Simple issue of supply & demand. With oversupply the wages of many degree holders are definitely downwards.

Thomas Stanley wrote in his book 'The Millionaire Mind':

4th & 5th universities are a cashcow for the govt & the govt-owned banks. Sinkies are already heading for extinction with pathetic fertility rate. More debts on the smaller future young generations will speed up the 'sinking of the ship'.