I've blogged that Singaporeans Reign as Mindless Slaves of Smartphones in SE Asia. Rampant sightings of people glued to their smartphones while walking, on trains/buses, eateries etc. A modern form of opium addiction on a tech device.

2 weeks ago, news reported that the seasoned pilot of South Korean Asiana Flight 214 felt stressful about making a visual approach as the instrument landing system is out of service at San Francisco airport.

This is a result of being too reliant/addicted on technology even though conditions are excellent for a visual approach by looking out the window & taking cues from an array of approach lights at the runway's edge.


Yet pilot feel stressful to land visually when technology is not there to help. It reminds me of the movie Pacific Rim when the invading alien battling the digital Striker Eureka disabled Eureka with an EMP blast. Old analog Gipsy Danger arrive in nick of time to turn the tide. There's a reason why old analog instruments are still present in cockpits.

During the Vietnam war, american strategists thought that missiles are the way to go. So they ditched guns on some of their fighters. However missiles are not dependable. They are called missiles for a reason & not called hitiles. Some dogfights end up with the american pilots helpless as sitting ducks with no guns to use when missiles are no more. Which is why guns are still mounted on modern fighters till this very day.

Very stressful without technology to help. The pilot flying the Boeing 777 on approach is on too steep an angle of attack till the tail touch the ground first.

Likewise i'm seeing increasing number of people reliant on garmin devices providing GPS guided directions. The skill of reading maps/street directory & making note of landmarks along the way seem lost. Not surprising if these overly tech reliant folks are screwed & stressed like the pilot who crashed when the tech device is not there, spoilt or out of battery.

I haven't blogged since early this month. Was engrossed (or hooked) on XCOM: Enemy Unknown. Is an addictive highly acclaimed game that was released last year- i even think about how to defeat the alien invasion in my sleep. The reason i play it now is a lady programmer has provided a solution easily implemented by a laymen to make it work on WinXP.

This month is also an exciting month for SG with the riot by around 400 foreign workers in Little India. Upon reading about the riot on a message board i'm amused it occured. Is good it happened so that the sleeping supporters of the hybrid regime can 'wake up' to the unsustainable economic policies. Following the riot, authorities banned alcohol sales in the affected area. Watching the rioting videos on youtube, it's obvious alcohol has little to do with it. Drunk people are not in a physical state to overturn vehicles, set fire.

Record shattering of the pristine image espoused by the hybrid regime:

Looks like the massive foreign labor is making a contributory effort to the downfall of hybrid regime which has mutated the country's economic institutions to be highly extractive be it local or foreign within its borders.

Extractive Landlord(Govt) Now Has a Sucker Paying Killer Rent
The retail space below Kranji train station has been vacant for quite a long time of at least 2 years since the closure of retail outlet This Fashion (if i remember correctly). Now the vacant premises is now taken by Kopitiam which has spam another branch there. How come no business dare to set up shop there for so long despite the population explosion to eat, drink & shit?


While i don't know about the racehorse gamblers since i'm not one. I do know that only fools would buy or eat at Kranji MRT since is only a couple of minutes bus ride to cross the border to Malaysia for cheaper clothes or food. 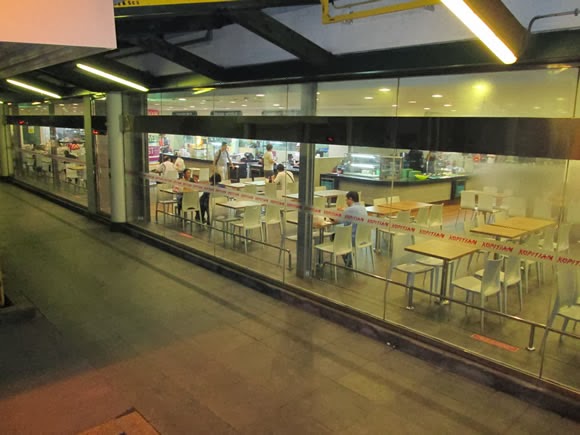 Side facing the main road. Picture taken at around 7:30pm on a working weekday from the overhead bridge. Poor business. Even if hungry, also must endure like 15-30 minutes more so can enjoy the enlarged purchasing power at Malaysia. Or eat something light like bread before knocking off to starve off the hunger. 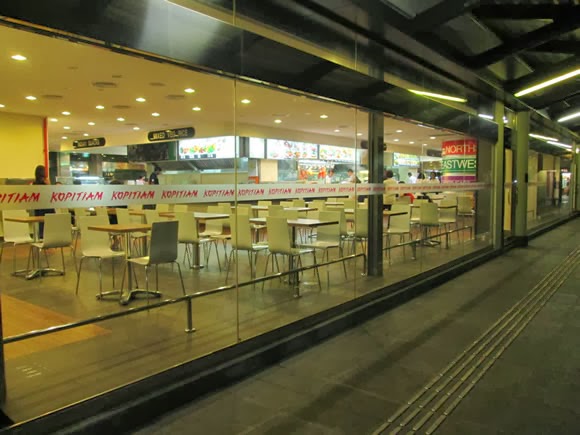 Other side facing turf club. Also few people dumb enough to pay for overpriced food & drinks for dinner despite long queue for the working crowd to return back to Johor via bus.


Clearly the demographic of customers at Kranji MRT are mostly to escape the high costs of SG.

Since i started blogging in 2010, i've mentioned about the killer rentals. I've never been to Nex mall at Serangoon. Well there is a discussion thread on hardwarezone forum started by lankileong that stretched 15 pages as of this writing:

This is certainly good news that reputable stores are biting the dust. When locals are hit with depressed wages or displaced by cheaper foreign workers, the buying power isn't there. The hordes of foreigners working in this high cost of living tiny island are just here to make & save as much $$$ to bring back home. This foreigner group of consumers don't add much to the retail businesses except for bare necessities.

With online stores offering cheaper stuff for a squeezed native populace, there's hardly a chance brick & mortar stores can compete. Why pay for the killer rent portion of a product

More & more natives are waking up to the startling fact.

Malls nowadays consist of the usual bunch of spam businesses. We usually find the same chain outlets in other malls. There isn't much uniqueness. Hence i don't consider missing out anything by not haven't been to Nex mall which is a popular suburban mall since it opened 3 years ago.

Back to Clementi Mall
Nex mall aside, i've blogged about High Rental - Even Starbucks Feeling the Heat in Clementi mall. Now the 2 shops diagonally opposite Popular Bookstore have closed. The Post Office took over the space of the 2 stores. And you know what's amazing about this? It's because the post office is previously just behind the mall! Literally a stone throw distance.

It seems no private businesses dare to take over & pay the exorbitant rent except for the Post Office which is a government linked company(GLC). A GLC paying killer rent to another GLC landlord - left pocket paying to right pocket.

I've walked past the Post Office at the mall 2x. I don't see the long serving employees. Being human, it's comfy to see familiar faces but what i see are never seen before workers. Looks like the new working hours 11am - 9pm at the mall is toxic to families. 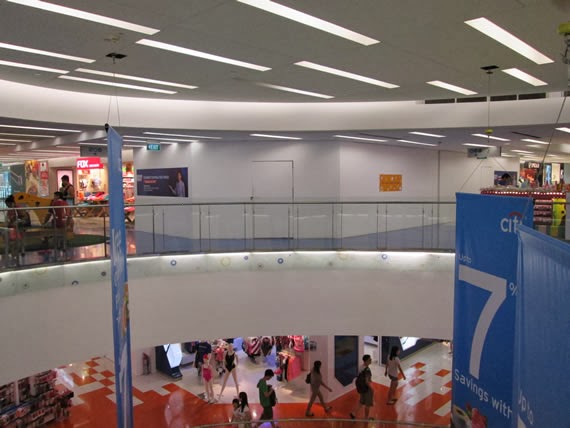 Renovation works of Post Office after 2 shops went out of business. 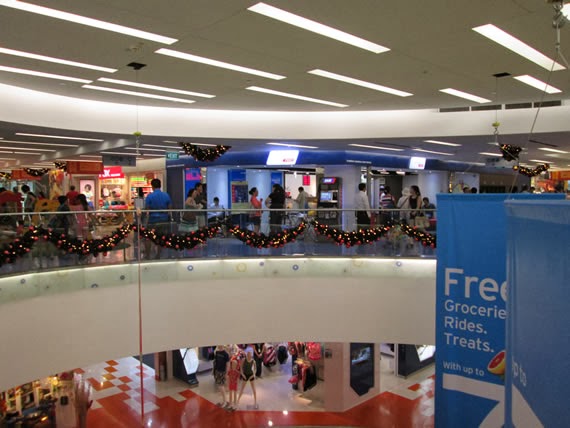 Some people go to the mall not to buy. But to collect the stuff in parcel that they buy via online!


I don't see a need for the Post Office to relocate just a couple of metres to be at the mall. They can just adjust the working hours a bit for parcel collection by the regular working crowd. Incidentally i see people with parcels (online purchases) the way up/down the escalator.

Regular mail has trickle down to pathetic levels as i see the postman collecting the mail. Since when have we receive a handwritten addressed letter?

Till now, i have not spent a single cent at Clementi mall. More sinkies ought to join the trend & avoid throwing away $$ on paying for the killer rent.
2 comments
Newer Posts Older Posts Home
Subscribe to: Posts (Atom)