Why the restraint from talking about politics since the elections is likely to be held this year? Is mainly to keep my mum happy as relative visits keep her in good mood. She has quarrels with a few of her siblings & as the younger generation i have no wish to be involved in the elders quarrels.

The exodus of malaysians is at its peak at the eve & before the eve of the lunar new year. Whole expressway leading to immigration complex is flooded with motorbikes of malaysians heading home. Looking at the horrendous jam, is likely it'll take at least 2 hours to clear both SG & Msia customs. 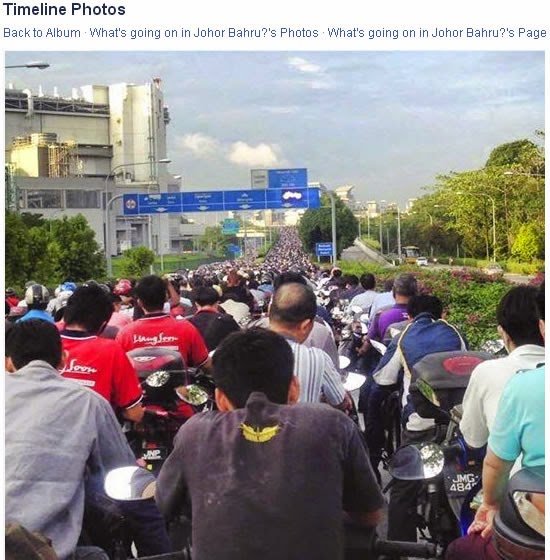 Helmets taken off to 'cool' heads in the insane jam.

Imagine being stuck in this type of horrendous jam everyday to work in SG just to earn S$. The jam may not be as horrendous on normal working days compared to eve of public holidays but still nevertheless toxic to personal & family life. 1 thing i admire about these malaysians is that after going through this type of tortorous commuting daily, they do not resort to retail therapy for example - No Starbucks Addiction For Johoreans Unlike Sinkies.

One can imagine the savings in their bank accounts & automatic pay raises every year.

Danger of Too Many Yesmen in a Company
Look at the 3 ingredients & one can easily understand their psyche. Just do as told by supervisor/boss even if it is a meaningless/unnecessary/stupid task. 要听话, don't make noise. Isn't it any wonder why the country's effort to raise productivity is fucked with all these 'Yesmen'?

Bus Driver Punished for Using Initiative to Correct Mistake. 要听话, wait for instructions to be given & then follow. Being a 'Yesmen' robot is more important than acting human with initiative to restore productivity. The company is sending a message to the rest of the workers that it is better to be a 'mindless robot'. Industrial age top-down command & control mindset.

Saying Yes Yes Yes to Dumb Instructions to Avoid Being Fired. How can Productivity Grow?

Just put up with 20-25 years of being a 'Yesmen' even if the given instruction is bad in the long term & is retirement at 40+ years old in their home country compared to sinkies slaving their asses off till 65 & still not enough for retirement in high-cost SG. Malaysians aside, the formula also applies to workers from developing countries with the main difference being the commuting part replaced with the need to recoup the cost of their airplane tickets.

The industrial age require obedient workers to shut up & do what they're told to do - consistent inputs in a steady environment. Such workers are still needed in the post-industrial age though they are increasingly at risk.

Why mindless cogs increasingly at risk?


On a personal note, i know 3 malaysians who can easily work in SG if they want to but they didn't. They are all self-employed in Msia. Obviously being self-employed & having a voice of their own is more important to them despite earning ringgit. Their values are different from those being treated as just another shut-up & be obedient cog in SG just to earn S$.

The difference in value system also explains why the current ruling party is having much difficulty attracting good men despite offering sky-high salaries. $$$ alone is not enough. There are other ways to make $$$. Some people's value system have self-respect, own voice higher than $$$.

Same for those who stay behind in Johor to work instead of working in SG for like double the salary. They value their personal & family life more.
2 comments
Newer Posts Older Posts Home
Subscribe to: Posts (Atom)