Are you proud to be a consumer?

I find the term consumer getting more common nowadays. Given the declining health of Mother Nature i find the term repulsive. Is like eat & eat like pacman. Suburban malls have sprouted up like weeds & locusts swarms of consumers descent on it especially during weekends.

Given the state that increasing numbers are stressed due to hectic worklife, more turn to shopping & consuming as a temporary way to destress & feel good. Of course it makes them more stressed later as their wallets are emptied. Vicious cycle continues & not many can get out.
0 comments

I wonder if is a new script by MM Lee since many won't be able to retire with retirement savings aka CPF. Is vital to have something to do upon retirement having seen a friend's dad mainly watching tv at home after retired. We don't necessarily have to work if finances are managed wisely during our younger days.

"You work as long as you can work & you will be healthier & happier for it. If you ask me to stop working all of a sudden, I think I'll just shrivel up, face the wall & just that."-MM Lee

Prior to retirement is vital as well to have friends outside of workplace as colleagues are likely to be fleeting.

"Many of our workers have a preferred retirement, & then they die early! It won't be long before the message sinks home that if you keep doing what you're doing for almost the whole of your life, the chances are you will stay interested & engaged in life, there's something to do tomorrow & you keep going. If you start saying,'oh! I'm old!' And you start reading novels & playing golf or playing chess, well, you're on the way down."-MM Lee

On way down if read novels, play golf & chess? What nonsense. There's a retired man whom i come across who play badminton 5 times/week. Still in the pink of health. Another disconnect with his message is that many are disengaged workers. How can someone stay interested & engaged if doing something distasteful for most part of life?

What is down is probably GDP growth since it doesn't take into account leisure. In the search for relentless growth, as many old people are needed to keep working to keep gdp up & not be a burden to others.

Are you going to play out this new script?
0 comments

What 'Team player' means in most cases

Another nice term to fool people. I find that the word 'team player' is often memtioned especially in low level & some mid level jobs. Ever wondered why there's often little creativity which is what is often needed in our increasingly commoditized world?

Often, many managers are looking for a yes-man or yes-women to work for them. Also many feel threatened by creative subordinates whom might supplant them during layoffs. As more & more of these insecure managers fill up with yes-man subordinates, the company gets increasingly bogged down.

To me is contradictory as is likely that yes-men are unlikely to be with initiative or independent. Hitler surrounded himself with many yes-men & we know what happens.

Are u still brainwashed by GDP Fetishism?

A lady has written to the paper about govt's gdp obsession on Fri titled "GDP does not reflect standard of living fully".

I REFER to Nominated MP Viswa Sadasivan's speech in Parliament, reported on Wednesday ('Look beyond GDP for true measure of welfare'), where he called on the Government to track indicators beyond Gross Domestic Product (GDP).

Measuring GDP is important as it provides knowledge of the amount of goods and services produced by our economy.

However, its shortcomings as a measure of standard of living have been well documented, most notably by Nobel Prize economics laureate Joseph Stiglitz.

GDP puts no value on leisure. Therefore, a society that works longer hours will have a higher GDP, but it may not score in human measurements like education and health.

It does not capture the work done in the non-paid sector. This includes volunteer work, parenting and household chores, all of which are essential for the well-being ofa functioning and gracious society.

It is also a measurement that ignores the impact of productive activities on the environment. This is because negative effects are not taken into account in the calculation of increased utility.

An extreme and perverse example is the recent BP oil spill in the Gulf of Mexico. A disaster like that would actually increase GDP, because to clean up the spill, jobs are created, while measures to mitigate the harm also boost GDP.

There have been attempts to develop credible alternatives to GDP. Examples include the United Nations Human Development Index, which combines GDP with health and education measurements, and the Happy Planet Index, which combines life expectancy, life satisfaction and how environmentally sustainable a country's economic activity is.

Nonetheless, many of these measurements are often dismissed by governments, and it may take some time before measurements like Bhutan's Gross National Happiness gain credibility.

In the meantime, a simple step towards looking beyond GDP is simply to recognise that it was never designed to be an indicator of an economy's welfare; it was simply intended to measure the economy.

Sadly many people are brainwashed by relentless propaganda on gdp up, up & up messages rampant in mass media. Swallow & swallow the messages.

GDP of course will grow when we need "Eat with Family Day" govt campaign to get people go home eat dinner with family launched in early 2000s.

Present govt's mentality is grow at all cost. Cancer type of growth also good. Can grow can already.

Spit along Sungei Pandan - Probably only 1 in S'pore? 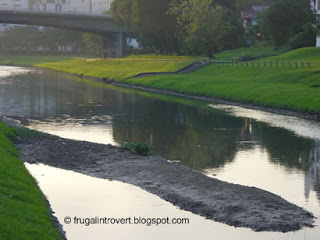 Probably the only spit among the small rivers in S'pore. Flooded during heavy rains, it is formed along a small river bend when flow of water is slower on the 'shorter inner bend' thus sediments are deposited.
0 comments

Wheeler Bicycles - U never expect is from.....

Undiscovered gem. I came across Wheeler bicycles from my local bike shop which is pretty rundown. However looks are deceiving! I checked the bikes online & was absolutely amazed at the description. I especially like the brief on:

Such briefs are especially helpful for buyers. I'm shocked that is from a taiwanese company! They sure are competitive in presenting themselves that i was fooled into thinking is a US bike manufacturer.

Sold it for $53. Buyer wants 2nd-hand to save $$, i clear off clutter in my bedroom. Is a relief now that the space is empty cause i put it on the floor beside the shelf which is full.

At times we need to ask ourselves before we buy an item:

Often times, buying an item only makes us happy temporarily. Some people buy stuff just to fill up the unhappiness/disatisfaction in their lives. 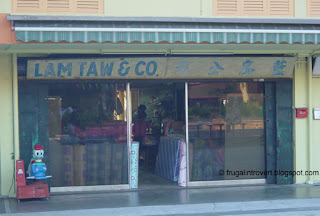 An old shop located in Tanglin Halt. Is an old estate with many old folks. Being there seems to be going back in time. Other than Pulau Ubin i doubt there's any oldies like this left. With the presence of quite a no. of elderly i feel a slower pace of life there.
2 hawker centres flank this old shop (front & back). I seriously doubt there'a any place in S'pore where there are 2 hawker centres a stone's throw away from each other.
0 comments
Newer Posts Home
Subscribe to: Posts (Atom)