What's this long string hanging across for? That's what came into my mind when i see this onboard a public bus(Maju) in Malaysia. Certainly is not for hanging clothes. String also run across on the other side of the bus too.

Apparently it is to discourage people from leaning their heads & staining the windows with their hair gel. Much less cleaning allows for better productive tasks instead. 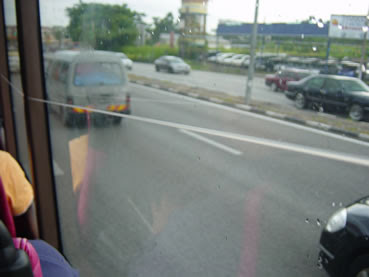 I noticed a new bus service by Causeway Link that plys non-stop between Newton Hawker Ctr carpark & JB customs ($2). Earlier on it launched a shopping shuttle that is obviously targeted at S'poreans. These 2 bus services tells me that the local shopping scene is no longer as attractive as before despite the numerous mushrooming of malls around S'pore.

Increasingly crowdedness & relentless rise in costs of living have attributed more people to go over to JB to shop.
0 comments 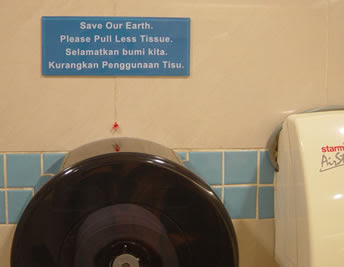 Came across this environmentally friendly message in a toilet at JB Jusco Tebrau - Save Our Earth. Please Pull Less Tissue.

More places will be banning plastic bags in JB starting 1st June (currently Sat is no plastic bag day). 20sen will be charged if a plastic bag is needed. Sadly in profit crazed S'pore the plastic bag addiction is strong & no businesses want to take the lead other than Ikea which have no major competitors.

From retail, the green message is creeping into toilets in our neighouboring country. Even their aircon is set at an environmentally friendly setting unlike S'pore where some places are still blasting excess cold air

Only return you'll have is the dividend yield. Yes it sure beats putting $ in fixed deposits. Although the index fund is only available to the public in 2002, the chart is to illustrate why buying at wrong time will lead to dismay performance of one's portfolio & a slow train to accumulating one's nestegg.

If one knows how to short, it is an exciting time cause money is made even faster on the down moves.
0 comments

Not Giving Up Despite Overwhelming Odds

Death of the Japanese Navy. Is a section on the Dogfights documentary which i've watched at least 12 times. Why? It inspires me of how the action of a woefully ill-equiped US destroyer escort inspired other ships & men to defend the US landing force at Leyte gulf, Philippines from a mighty japanese fleet led by the legendary Yamato.

Did the captain of that destroyer escort say to himself 1) the battle is a sure loss? 2) how to defend with only a few destroyers+escorts & carrier escorts? 3) Follow the others & run? No he didn't have such defeatist attitude. Other ships & men got morale boost & charge the japanese & pulling off a miraculous victory.

Who says the action started by 1 man is not enough to change the tide of battle?

Sadly the body of that courageous captain who led the charge was never found.
0 comments

Both countries have the state controlling majority stakes in companies listed on stock exchange hence the term- State Capitalism. Very little is touched on S'pore's type in books written by western authors. So what's the difference you might ask? Following headline from yahoo finance gives a good surmise:

In China their govt uses state capitalism to strengthen the local companies so as to employ more of their population - happy about their wages & lives & in turn support govt. In S'pore is quite the opposite. In recent years the govt has flooded in masses of cheaper foreign labour to suppress wages so as to have higher earnings for the state controlled listed companies. Lower productivity is a result.(short term benefits at expense of long term)

With much of the population's wages stagnating/declining in real terms & highly in debt due to mortgages, there isn't much discretionary spending power left to fuel the economy further. How can most businesses grow when consumers don't have much spending power?

Thus far none of S'pore's businesses(non-state) make it big compared to other Tiger economies like HK, S Korea & Taiwan. Is also a reason why people say the current govt has run out of ideas to grow the economy & the casinos are a desperate measure. With the resources of the state backing those state controlled companies, private companies have a hard time in certain sectors of the economy - hence there is no free market.

Current state of affairs is among 1 factor leading me to have a bearish view on S'pore's future.
0 comments

Was officially opened by the old man who claim is built to benefit the peasant's homes value which will never drop. He is wrong. Such artificially inflated price bubble will burst 1 day. Is a question of when. Starhub's paying more dividends than earnings is unsustainable. How can exhorbitant mortgages be sustainable when wages are declining/stagnant for most of the population in a volatile economic environment? 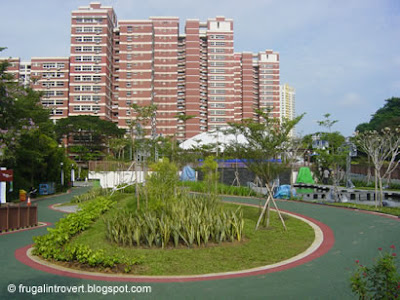 I find it absurd it took 23 months at $34M to spruce up a small part of this 1.2km stretch of stormwater drain. Spruced up area is mainly sited from opening at Tanglin Road for a few hundred metres.

Platform of man-made landscaping over the canal: 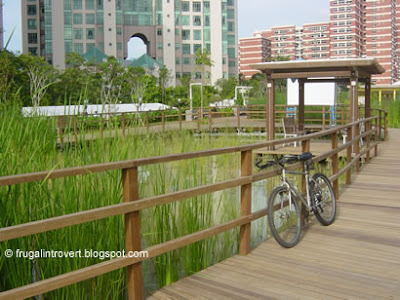 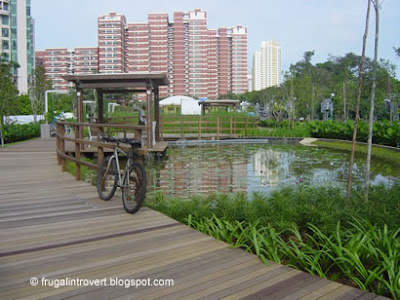 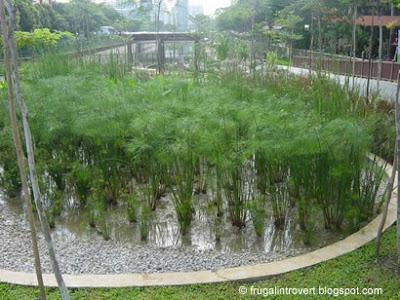 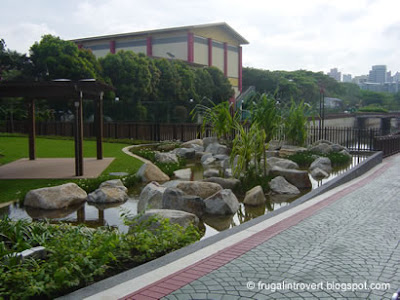 A crossing added with bit of landscaping over the stormwater drain further down from Tanglin Road: 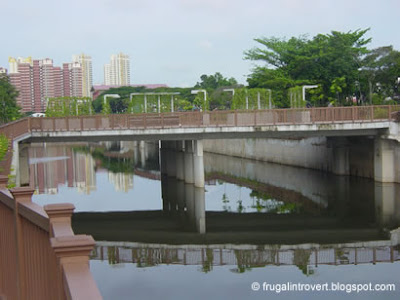 Extended shelter. The last of the so called main sprucing up. 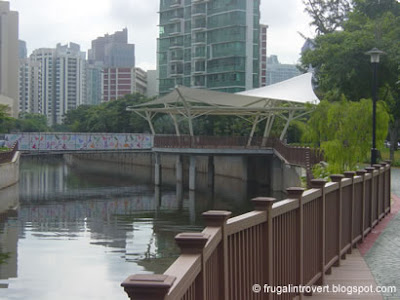 End of this Alexandra Canal is Zion hawker centre on opposite bank. A pitstop for food & drinks.

An article in the State Times(more civilised description) today on the poor internet connection experienced by local World of Warcraft players. All along my gut tells me something is not quite right with Starhub. A few days back i experienced internet outage for a few hours.

Its dividend of 20¢ is more than Earnings Per Share of 15.3¢ which is unsustainable - it's paying out more than it earns.

Naturally something has to go/deteriorate since the market here is saturated already. On a sidenote i consider property related stocks (reits, malls) dangerous as well. Increasing no. of citizens are in debt up to their eyeballs & unable to meet minimum sum in their retirement accounts.

Property market will crash badly one day & bring down with it related stocks as well.
0 comments

My old bike which i still commute around with little fear of being stolen. Rusty & worn in so many areas. Pictures will do the talking: 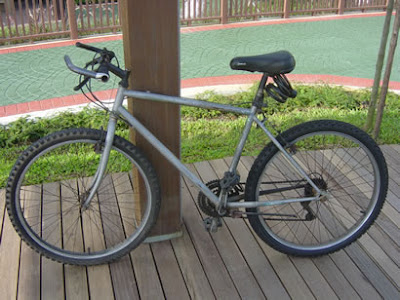 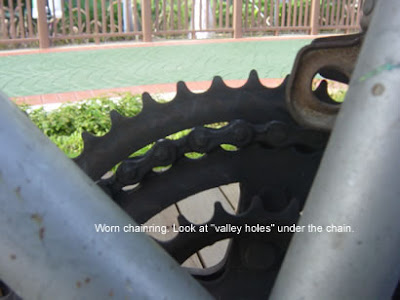 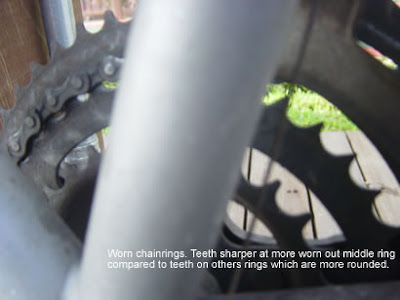 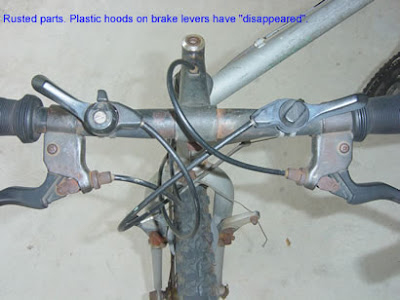 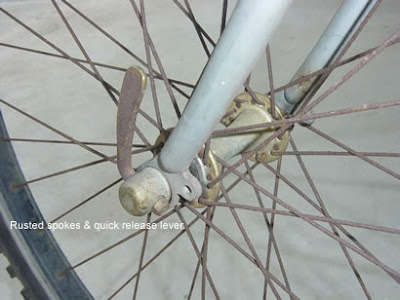 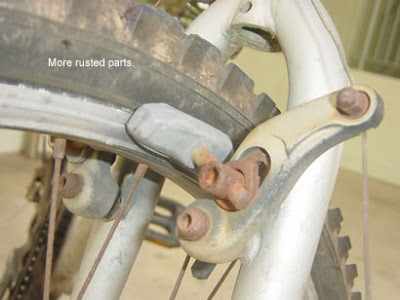 Bought it from a neighourhood shop(closed down already) during my teenage years for around $300+. I know nothing about bike sizing then. Surprisingly though this old bike fit me pretty well. $300+ budget nowdays can get a better components bike. I consider my $427.50 Polygon Helios F100 to be a good deal for its components(dare not commute much since afraid stolen).

Components on the old bike that is worn out & replaced are:

Over the years this old commuter bike has added at least $2500 to my bank account from bus/train fares. Worthy investment indeed on road to financial independence. Comes along with time savings & exercise factors as well. Fun too with exploratory rides.

Why Riding Commute is Preferable over Short Distance 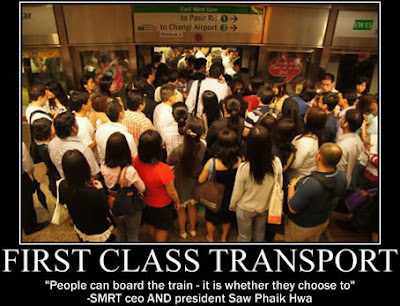 Taking commute to libraries as an example i can ride to their doorstep from my flat's lift lobby. Commuting time starts the moment you step out of your house. Why pay to squeeze like sardines with others & still take longer to reach destination when i can ride & exercise killing 2 birds at once?

I like being in control, something waiting for train/bus arrivals can't give me.
0 comments

Look with awe at how wave overrun wall defenses & float boats over & capsize it:

If you are interested in the subject it is easier to study & get good grades. Many people score badly in geography since the subject is taught in a boring way in school. Govt propaganda of raising school fees relentlessly to provide better teaching is a bunch of bullshit now with online videos such as this to make teaching easy & fun after 'wowing' the students to stir up their curiosity.

Can't Slow Down- Bomb in Bus will Explode Analogy

Rode back from jurong library returning stuff at around 10pm. Ridiculous to see construction crane working at jurong entertainment mall. Over at jurong hospital they are still digging holes for the upcoming hospital. Although i'm aware of the good perspective of faster completion time so as to operate for masses to use. I just can't help as though the treadmill cannot slow like in movie Speed- If slow down the bomb in bus will explode & kill everyone onboard.

Pace of life in S'pore...... Govt's inexorable obsession with growing gdp at all costs(minister's pay packets are linked to it).
1 comments

Colossal waste of funds spent building the world's biggest & most heavily armed battleship. Bigger than an aircraft carrier, its 8 main guns are 46cm! Was attacked & sunk by allied aircraft during WWII like a bear attacked by a swarm of bees.

A fan of the battleship apparently built a lego model of the ship. Frickin impressive! Legoland theme park will be opening in end 2012 or early 2013 in neighouring Johor, Malaysia. First such Lego theme park in Asia. Is a shame the 'scholars' populating the government ministries follow what everyone else is doing by bringing in Universal Studios. In such a hot & humid local climate... Legoland is what ought to be brought in instead.

Personally i find Lego toys a nice tool for children's creativity. Possibilities are so many. This toy from Denmark is considered expensive considering is just plastic building blocks. What's amazing is to date there are no significant similar competitors in the market.
0 comments

Not Getting Discouraged during Trying Times

A friend mentioned about trying times(financially) & is feeling stressful due to debts & not much improvement in life. I consoled him with a few perspectives on the no improvement part. Often times we put in effort after effort & it seems like nothing is coming out of it. Discouragement usually follows.

It may not be the case. Consider these:

Slowly bit by bit it accumulates. Not seeing any visible effects doesn't mean is not working at times. The boiling water analogy is a good one- trigger point not reached yet.

Ever since Robert Kiyosaki's Rich Dad Poor Dad awoken me to the financial aspect of life especially the rat race, i've been an avid reader of personal finance & investment books. Thus far the best series i've read is the Little Book Big Profits series whose authors are among the best in their respective fields. 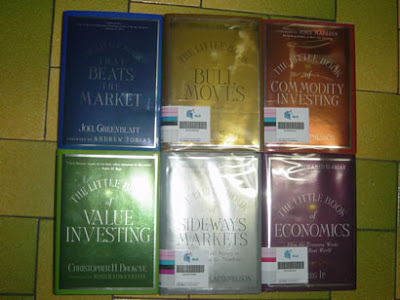 There are 16 books in the series as of this writing. I've only bought the first two (left most of picture) & borrowed the rest from library & read them twice before returning. The library in S'pore is a tremendous asset to the average person compared to someone living elsewhere.

Money is an important topic to learn about. Being a slave to money & slaving away all our lives working for it is a terrible price to pay. Perhaps that's one reason why money is not taught in school or else businesses & government would lack workers who would work in fear of not having enough money. Fear keeps the workers obedient to a large extent which is necessary especially in a large top-down command chain corporation.
0 comments
Newer Posts Older Posts Home
Subscribe to: Posts (Atom)