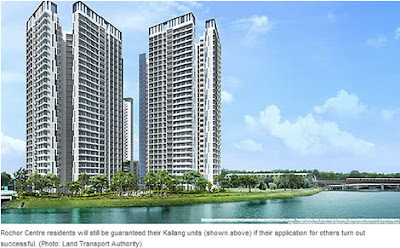 Residents at the blks of Rochor Centre were ordered by the government to vacate their flats for the land to be converted to an expressway. I'm appalled after looking at the replacement flats given to them at nearby kallang.

What's wrong with the flats? Well the 3 blks are triangular in shape & is safe to assume the hanged clothes area is on the inner face of the triangle. There is almost no sunlight for the residents to dry their washed clothes & socks. Kitchen area & 1 of the bedroom is dark since the sunlight is blocked out due to the triangular tall shaped design. Isn't that gloomy?

Increased quality of life? More like an even worse packed pigeon hole.
0 comments 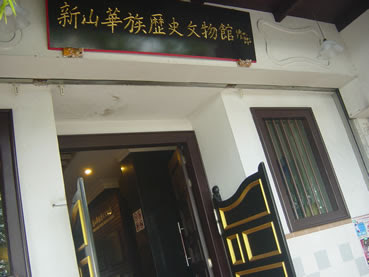 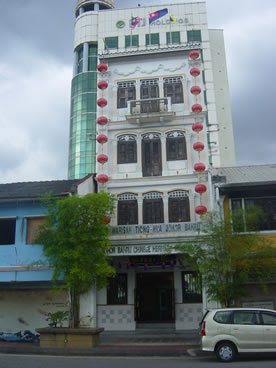 2 chinese related museums near the customs & immigration complex. In my opinion if you have time for 1 it is better to visit the JB Chinese Heritage Museum(pic above) facing the sea located near ocbc bank. It has 4 stories of exhibits & the top floor is dedicated to Sun Yat Sen when i last visited.

Other museum is Kwong Siew Museum(pic below) located beside Esso petrol station with the police station behind. Exhibits are located on 2nd floor. Many of the exhibits there are not protected by glass enclosures due to lack of funds in running the museum. How to protect theft & vandalism of old antiques? There is a man who will go up to the 2nd floor exhibits with you to make sure the items are ok. Thus you get the feeling of a person within sights watching you instead of cameras at the chinese heritage museum. 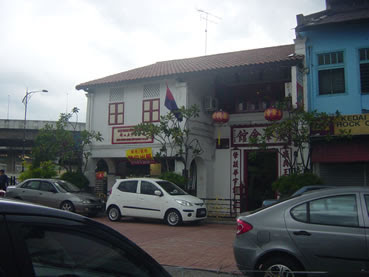 Admission fee is RM5 for both. 9am-5pm. Both are closed on Mon.
0 comments

This is my furthest ride to date & also the most tiring. 7 of us went for the ride & i was the last for much of the journey. At times it was demoralising when the riders in front of me are nowhere in sight especially after a few bends & mild slopes. At the later stages voices of whether i can make it are swirling in my head. Allthough the terrain is relatively flat, i was advised by the experienced organiser to switch to a smaller chainring & just spin to avoid muscle cramp instead of pedaling on the biggest chainring.

I had little appetite for lunch & had porridge instead. Guess my body is not used to cycling this sort of long distance at a fairly fast(to me) pace. The gear shifters on my entry level bike suck too so i'm stuck with some pedaling inefficiencies.

We stayed for the night at Anika Inn hotel at RM60. Dinner at a nearby eatery is fantastic value for $$. We order quite a no. of dishes & it works out to be around RM11 for each person's bill. Luohanguo drink is RM1!! Is amazing that the further we cycle from s'pore even in the Msian state of johor the cost of living gets lower & lower.

Look at tiny S'pore. Distance to Kluang is a few times the north-south distance of minuscule s'pore.

Another lady & a guy along with me decided to take a cab back to S'pore. The guy didn't have enough sleep the night before as he was working & worrying about his business. The lady had ridden till leg muscle cramp. Though i didn't have any cramp i feel i'm near my limits & is better not to push & overexert myself by riding back. Besides is not nice to be a burden & slow down the other 4 riders over such a long distance. Cab fare was RM160 (RM100 to JB, RM60 to sg's queen st).
2 comments

Read that ocbc cycle 2012 got new category call super challenge 61km @$140. I consider it frickin expensive. The 2 msian rides by cycling freaks i joined this year so far is only a fraction of the costs & i get to enjoy msian scenery with little/no traffic lights. The ocbc ride organiser point out the riders can enjoy the S'pore skyline. That's a bunch of crap as it can be easily done by riding in the late night or wee hours at night or early morning during the weekends.

S'pore is crowded enough so why should i pay an absurb price to ride & squeeze with countless others?

Kids ride 5km @$42. Tricycle 100m ride for kids learning to cycle @$26- frickin absurb. Fools with $ to flush down the toilet would take part in these rides.

Although the ride is an event to promote cycling, the prices are considered excessive. It'll mostly draw those who like the crowd atmosphere as well as those joining the criterium to compete with others. Other than that is better to give the ride a miss & put the money to better uses.
0 comments

Confusion About Meaning of Introverts & Extroverts

It seems many people are confused about the meaning of introverts & extroverts. So introverts attempt to act like an extrovert especially during work due to the social stigma. Being quiet, shy or spending a lot of time at home does not mean one is an introvert, Similarly being able to talk a lot doesn't necessarily means one is an extrovert.

An introvert is one who by choice prefers to be in the company of a few friends or alone & feels happier doing so, while extroverts are those who prefer the company of many people. Introverts get their energy & recharge by being in their more private world.

An extrovert is one who is more outgoing & would prefer to have more friends to hang out with rather than stay at home. Extroverts derive & recharge their energy by being in the 'outside' world.

Colleagues find me strange as i don't often hang out with them especially during lunchtime. Being frugal is a reason as i like to eat alone as i can control my meal expenses instead of spending unnecessary in the company of others. Finding a seat is easier for a lone diner too. Another reason is i prefer time to be alone.

There happens to be quiet spots beside the railway tracks (now dismantled) near where i like to go for lunch. Occasionally i'll rest here & have some quiet time & watch the train pass by before heading back to the workplace. 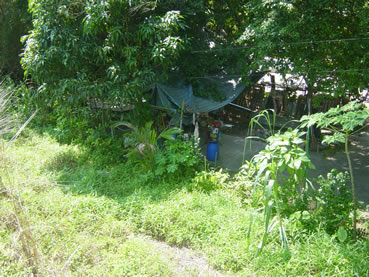 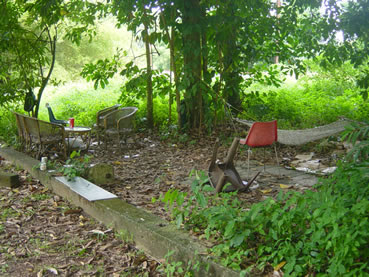 I'm not the only one who likes peace & quiet time. Look at the hammock & the rattan furniture.
0 comments

Flooding in Clementi After Heavy Rain

In all my years of living in clementi, i've never seen anything like this which i'm totally shocked when such pictures surfaced on STOMP (site where unusual 'snaps' are posted).

Road literally become a canal & nearby hawker centre also flooded. It can be attributed to climate change or too much development in S'pore & inadequate drainage or simply both. Present economic model based on consumption & waste which many governments around the world are obsessed with are literally digging mankind's grave. Is not quantity of consumption but quality & happiness model of economic growth yardstick which ought to be adopted. 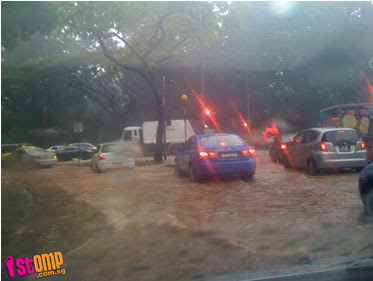 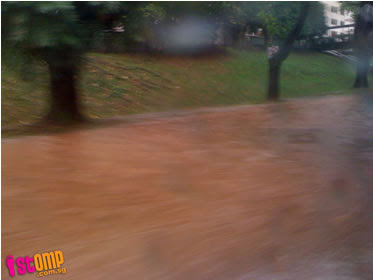 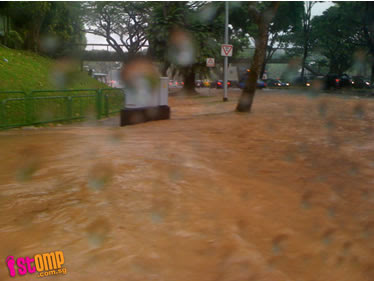 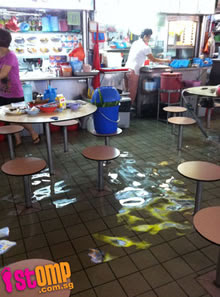 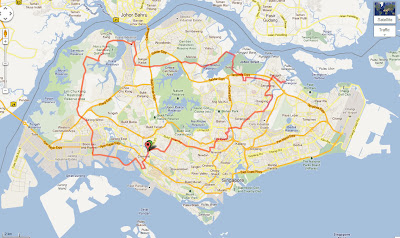 Tiny island of S'pore. My original intention is to ride to see the newly opened northern phase of Punggol Waterfront located the the northeastern part of the island & then join a group's 85km counter-clockwise ride back home.

But alas i kind of lost my way at Toa Payoh near Braddell road. Flipped through the map & rode my way up to Punggol via Upper Serrangoon road. Again i wasted more time trying to figure out the route upon reaching Sengkang. In the end although i manage to ride to the main entrance of the park connector to Punggol waterfront i didn't have time to see the northern opened areas. I detoured & headed for Jln Kayu to join a group.

When the group reached MacDonalds at West Coast Highway i broke off from the group & headed home. I manage to clock 84km. Close to the group's 85km ride as they continue their ride home to the northeast.
0 comments

Why Buying IPO Stocks is Dangerous

I'm of the opinion that buying ipo stock is dangerous. Mindset of companies is to raise as much $ selling shares & thus it is of their self-interest to paint a rosier picture to suck investors in. Is like a lady putting on lipstick, thick makeup & a pushup bra to make appearance better than it is to lure people's eyes.

Market is always there. There is no need to get excited about IPO stocks.

What caught my attention is the warning about shrinking in non-resident population. This factor applies to other businesses in S'pore. Govt is just force feeding population figures to keep the gdp churning without much regard to social & quality of life costs. Instead of encouraging more automation & moving up the tech ladder, the current govt likes to import many foreigners. After all the govt likes foreigners to consume, consume, consume to drive the demand. How much can automated consume compared to cheaper workers who need to consume food, consume services in red-light districts, consume bus & train services?

When the non-citizens start leaving the country, you can bet on a fire sale when prices come crashing down.

The supermarket chain said the decline in profit was primarily due to an absence of investment gains for the period after it closed 2 outlets at Ten Mile Junction last November and Tanjong Katong two months ago.

Both outlets were closed as the buildings they occupied were sold for re-development.

While it will be actively looking for suitable shop spaces to open new stores, particularly in population centres where it does not have a presence, it said revenue growth in the industry may be affected if there is shrinkage in the non-resident population as a result of any slowdown in economic activities.

Sheng Siong share price jumped 70% over its IPO launch price of 33 cents to peak at 56 cents with investors confident of its business model.

Its IPO was oversubscribed by approximately 1.3 times.

The group opened two new but smaller outlets at Elias Mall in January this year and Teck Whye in May.

It is scheduled to open another 2 outlets in Woodlands Industrial Park and Thomson Imperial Court by the end of the year.

CEO Lim Hock Chee said the completion of the Mandai Link Distribution Centre in May has given Sheng Siong the much-needed warehousing capacity to engage in more gross margin enhancing initiatives like direct sourcing and bulk purchasing of goods.

In its press release, Sheng Siong warned of growth stalling amid the economic uncertainty.

It said: "One of the drivers of revenue growth in the industry is increase in population, which may be affected if there is shrinkage in the non-resident population as a result of any slowdown in economic activities.

Again let's look at CapitaMalls Asia which i have mentioned in my previous blog posts which ipo at $2.12 . Same story as in investors got suckered in with the nice 'story' sold to them. What happened after the initial hype & euphoria can easily be seen from the chart: 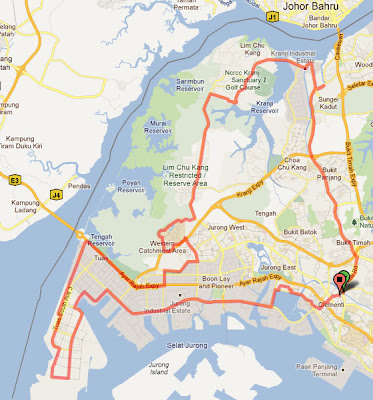 What interest me is the Tuas south portion which i never went to. Encounter headwinds at Jln Ahmad Ibrahim & southwards direction journey into Tuas. Barb wire ring the perimeter of deserted Tuas south. I have always wanted to take a look at Tuas south area but is pretty boring riding alone. Going in too big a group is not to my taste either. This ride's group size of 7 is comfortable for me as well as the organiser.

Following photos are taken by the organiser Chua Tien Seng: 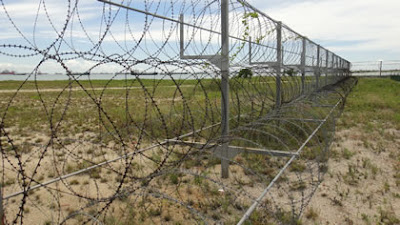 Barb wire perimeter. Notice the many ships off the coast. 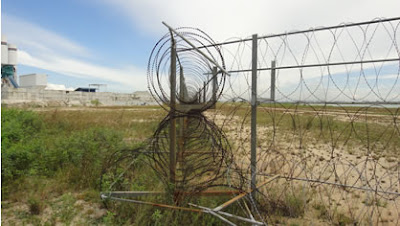 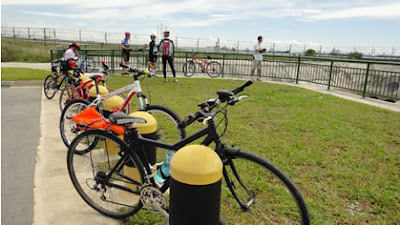 End of Tuas South Ave 7 where barb wire fences are seen in background. It might be extended should land reclaimation goes on.
0 comments
Newer Posts Older Posts Home
Subscribe to: Posts (Atom)