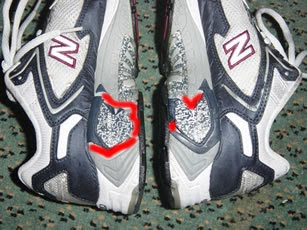 Wore my new running shoes which has been worn twice for a cycling trip to Desaru. Was dismayed there's chip-offs at the end of 1st day (indicated in red). Never expect stress to be generated in that part of the shoe when cycling.

Rubber sole beneath chipped area on left shoe is hanging precariously. Luckily managed to make it home for superglue repair or else the pair is wasted. Seems simpler design is better.
0 comments

I'm continually amused at the huge bags that many people carry for their badminton sessions. Seem like a herd mentality. For the 2 foreign players they just chuck their racquets into their backpack (same as me). Enough to hold my shoes & a t-shirt as well. Why would they want excess baggage?

Even if the big bag is free when purchasing racquets i will think twice about it since it adds more to the clutter -occupy so much space...

I find gift vouchers to be ideal instead of physical items. Find it amusing at times when i come across thread topics of people asking what gifts to buy in forums - what a hassle.

Eliminate worries of whether receiver will like the gift. Is a waste if the gift is something the receiver also has. In our increasing overcluttered homes i find it a waste (also email spam clutter).

A reason given by the state for the hike in university fees is that is not cheap to provide quality education. The education sector is perhaps the slowest industry to adapt to changes/advances. With the internet the cost of delivering top notch education by experts around the world (which you can choose) has shrunk a great deal.

Instances of people sharing their expertise/advice is not uncommon on the internet.

Director of Lord of the Rings has a fine piece of wisdom which i come across on the extended version:

"When you are doing editing it is important to wipe your mind of any preconceptions. Don't try to justify decisions you made at the time because you had a justification for doing something 2 years ago when you shot it. Don't carry that baggage anymore. Just kind of sit back & be critical & just say: U don't know the story, characters, shooting it. You know, i'll love to have that total innocent lack of knowledge." -Peter Jackson

Many managers/ministers are heavily entrenched in their way of thinking & doing things because that's what got them to where they are. To do so otherwise would expose their incompetence in front of their subordinates & embarass them. More is at stake with their financial liabilities such as housing, car, kids etc which makes it even more difficult to dislodge their 'expired' thinking & try something new.

Often a lot of pain is needed to jerk them out of their comfort zone & think/do something new. Smart bosses tap the innocence of raw recruits cause they have no baggage & can look at a situation/problem with fresh angles.

Remember MM Lee's eugenics comments about telling graduate mothers to give birth more? It reminds me of Saruman breeding the superior Uruk-hai which are stronger than orcs & goblins. I suppose the hobbits, dwarves, elves & men are considered 'lesser mortals' as well. Lesser mortals as we have been described as by a subordinate of MM Lee.

Then his recent no retire comments. Script bears bit of similarity to:

Local media portray the state capital of Johor as a dangerous place. No doubt it'll deter some from going there to shop to stretch their S$ further. Yes the crime rate is higher than that of S'pore.

At 1 time i was also brainwashed by the state media. Is only after i read a comment somewhere on the net that i 'woke up'. The argument is that we don't have to go JB to get rob cause we are getting robbed in broad daylight here in S'pore - countless hikes in transport, gst, utilities etc etc.

Practise simple common sense as in dressing simply to enjoy the higher purchasing power over there rather than blindly swallow the fear based message broadcast to us.
0 comments

Just watched the extended version of Lord of the Rings movie & the thought of the impact of the movie cost compared to Youth Olympic Games which 88% of 6430 people voted 'Not interested at all'.

Pathetic ticket sales & much of the tickets were bought by Ministry of Education to get pupils to attend in a fake show of enthusiasm & support.

Back then a LOTR movie cost around US$95M each. With inflation factored in the overblown YOG budget (US$284M) is enough for 2 LOTR movies. When people think of LOTR they think of New Zealand with its magnificant landscapes. Impressions linger on for years & years.

Government's spend freely (taxpayers $) attempt to leave good impression has failed to garner local support. Compared to LOTR's impressive enjoyment & continued 'talk about' after the trilogy ended, YOG has already faded into the shadows before it even started.

Makes me wonder how a bloated bureaucracy spend $ compared to private filmmakers in creating 'experiences' for masses.
0 comments

Heard a player mention that new community centres have no water cooler-make $ with vending machines. How true is that i have no idea but newer CCs like Buona Vista & Frontier have no watercoolers. Neither does old CC like Ayer Rajah.

No watercoolers will likely force badminton players to buy from vending machine. Rental space of machine = profit for CC. Watercooler = expense for CC. In addition:

I'm used to drinking plain water. I'll rather drink tapwater than pay inflated prices for those carbonated sugar drinks. $ saved can buy a 1.5l bottle instead just that is not chilled. Is a matter of whether your rational mind is doing your thinking when thirsty or your emotional mind.

Waiting for Suckers & Profit Maximisation is Name of the Game

Someone wrote to the paper about the Tanjong Pagar site. URA has stated they won't sell if highest bid is much lower than their est. value. I have no idea there's so many hotels in that area. Clearly the site is high risk for a hotel developer with many competitors already there.

"2 hotels are being built along Tanjong Pagar Road. 2 other sites within the vicinity have been earmarked for hotel development.

Add these to the 6 hotels currently operating within a 400m radius of the Tanjong Pagar MRT station & we are looking at a grand total of 11 hotels.

That is a little too much for an emerging residential neighbourhood. I urge the URA to allocate more land in the vicinity for street-level recreation & activities."- Toh Cheng Seong

There used to be a fountain in Clementi central. Together with bus interchange it is being torn down & building a mall with interchange. People used to gather around fountain to rest & socialise. Sadly there's no profit potential. Malls sprouting up like weeds around S'pore to maximise profit is the name of the game now. Street-level recreation & activities? Seem to me is mall-level recreation & shopping instead.

Consumerism instead of recreation. Consumer instead of citizen...
0 comments

Bureaucrats Waiting for Sucker to Buy

If highest bid is too much below their so called estimated value, then the other bidders are lesser. These are people in the trenches. They know the situation & risk better than those scholars in ivory towers.

Government is just waiting for a sucker to pay top dollar for their so called 'estimated value'.

Do you ask yourself how much of rental component are you paying when buying an item?
0 comments

Replaceable cogs with no brains

No explanation or the rules say so. At times this is what you get when a worker gets a job description & rules to follow- for many is just follow blindly & collect paycheck. Later the people up there in their ivory towers wonder why business is bad & later layoff the cogs.

Many managers like hiring team players - Yes man/woman who won't question their decisions or status quo. Many see those individuals who question as troublemakers.

"Website didn't make things clear so I called the YOG hotline. Person on the line said my 16-month-old son would be allowed in but, to my astonishment, she added that he required a ticket. I told her my son would be sitting on my lap and uestioned the rationale for insisting on a ticket for a toddler. She had no explanation for that but told me that children, regardless of age, required tickets & there was no concession for toddlers.

Can the YOG organisers explain why a toddler needs a $80 ticket to watch each ceremony when he won't be taking up a seat? It clearly does not make sense."- Esther Chia