Is been a couple of days since the mass purge of bookmarks accumulated since 2006. It has become a nightmare for me. At times when i stumble upon a webpage i thought i might reference again i'll bookmark it. However during springcleaning it turns out i don't visit the vast bulk of those bookmarked pages again.

I figured i deleted around 70-80% of my bookmarks. Again it's back to Pareto principle of 80-20%. There's a feeling of being 'free up' after getting rid of so much clutter.

Is not just for bookmarks. At work the volume of emails are horrendous. Try drinking water from a fire hose. Many are scared of doing aggressive pruning. There are office workers buried under a mountain of work emails with a sizeable number of them unread.

Why work emails are horrendous in volume?

Do one need 10GB of email storage space? I would say more space encourages the hoarders to keep the clutter.

People need to realise that the situation now with so much info overload is not turning on more 'taps' to drink. It is deciding not to turn on certain taps at all.

More is not always better.
1 comments

The end of cheap oil is another point i've often been hammering on:

I dislike the 'Youth Olympics Games Overbudget' Minister but this is what he said in parliament yesterday:

I think most of us can remember our parents saying "Don't waste!", but somehow maybe as we became more prosperous, we've forgotten that imperative. I think in the future, the era of cheap energy, cheap resources, cheap food, are going to come to an end and we will have to rediscover the wisdom of our grandmothers, of not wasting."- Vivian Balakrishnan, Minister for the Environment & Water Resources

Don't waste!
Frugality is a forgotten virtue in Sillypore. With wide income disparities, many sinkies prefer to make themselves slaves with high debt in order to buy more & better stuff to impress others who are also frantically trying to impress others. Sinkies have bought so much junk that they even rent extra storage space. Tragic consequence of their stuff owning them instead of them owning the stuff.

Expensive oil = higher costs for everything down the line. Domino effect.

I still stick to my view that property prices will crash severely or collapse. 30% elderly sinkies in 2030 will be forced to sell their residences in order to buy expensive food.

When old sinkies sell, foreigners would also join in the selling thus fueling the plunge. Foreigners would begin an exodus out of expensive Sillypore back to their home countries where food is cheaper. Take Malaysia for example where rice, sugar, cooking oil, cooking gas, petrol are subsidised. Their countries would also cushion their citizens with affordable resources.
0 comments

Half Ass Approach in Salvaging Plunging Morale Among Sinkie Males

I received my $80 vouchers in the mail yesterday while 1 year clubhouse membership will be mailed at a later date. Clubhouse membership is of little use to me. When i went to Sim Lim Square to buy the graphic card, i popped in to Illuma mall to have a look. There's a roadshow selling the clubhouse membership there. So many sinkies are already killing themselves with long long hours of work. Where's the leisure time to go clubhouse?

They say vouchers are given as a form of recognition for national service & reservist duties. That is not the real reason. Real reason is morale is fucking low in the armed forces.

This picture widely seen on the internet by sinkie males is the epitome: 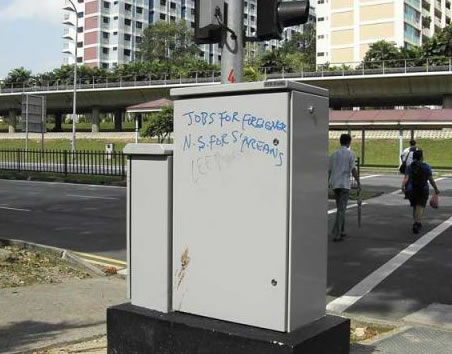 Jobs for Foreigners
NS for Singaporeans

And surprisingly today in parliament, a redundant Yes-men from the Pro Alien Party proposes a national defence tax on non-citizens .

The giving is a half-ass approach. Insincere. If they wanted to give they would have credit the $$ into our bank accounts. No sign-up = they don't need to give. Their $80 won't stop the continued plummeting support among NSmen towards the Pro Alien Party.

Tip to Maximise Voucher Value
Is best to spend it on groceries. Is a waste to spend it on overpriced items/services in high rental shopping malls. Boycott the blood leeching landlords.
0 comments

Swiss Say No to Excessive Pay - Dumping S'pore Further Behind

After i've written Gotthard Base Tunnel - Reflects How S'pore Veers Off-course , Sillypore is being dumped further behind as our role model Switzerland progresses.

And yesterday the Swiss voted again on an important issue.

We have seen from the 2008 financial crisis that CEOs of american companies like Lehman Brothers, General Motors, Ford, Citigroup etc have performed miserably. There's no justification for american CEOs to be vastly overpaid when their companies are losing out to their japanese & european rivals.

Similarly there's no justification for sillypore ministers $M salaries when their performance are compared to other 1st world countries govt ministers.

You can see from the above graph that in 1980 the average US CEO pay is 42x of average worker. Whole mess started when Ronald Reagan was voted into office in 1981 by daft americans who got conned by the actor's sweet talk which is why i consider Jimmy Carter Is the Last Great Modern American President.


More is not necessarily better.
0 comments

My Nvidia GeForce 210 graphic card died after 2 years 4 months & it is a pain looking at the monitor screen using the motherboard's graphic card. Resolution is low & the wordings are coarse. Prior to its demise i already suspect the card is dying due to weird noises from the fan. When the GeForce 210 finally died, the fan can't rotate freely as i give it a push.


My buy & get out shopping trip: