Overcrowded tiny island. Construction for an extra entrance/exit for Clementi station has just completed. There are other stations along the line like Commonwealth station with this addition as well.

Oh gosh! It took at least 15 months. I just took the completed photo & went back searching for the early construction photo & found the picture file dated back to June 2014. 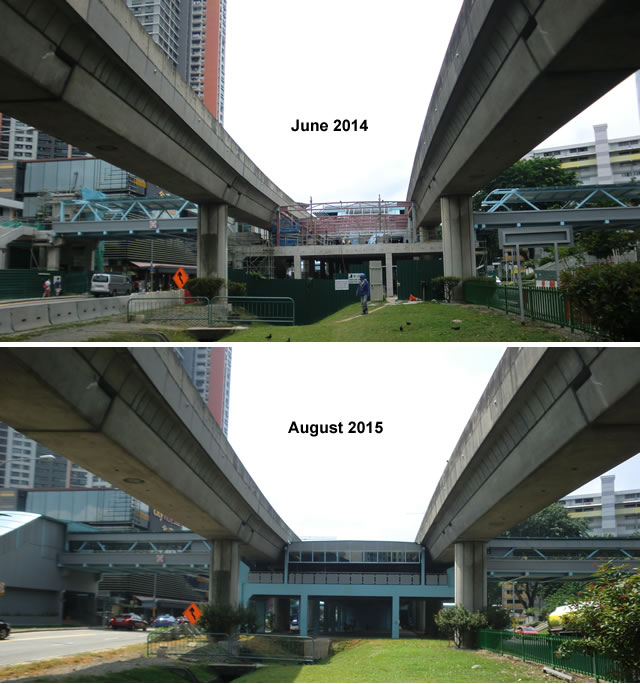 At least 15 months to be done up for for this simple addition compared to 4 years for 2 super expensive casinos to be completed. Clearly the completion time ratio of the 2 indicate the hybrid regime does not consider it an urgent task to relieve the peak hours congestion.

With the slow construction speed of a simple addition, the aristocrats would prefer the peasants to have more clusterfucks during rush hours:

With the frequent breakdowns & clusterfucks going on, the hybrid regime has to sacrifice the transport minister(sacked) in addition to gerrymandering the constituency he is in for the upcoming election scheduled to be held in slightly less than 2 weeks time.

The green patch of grass parallel to the road has been sacrificed for the building of the extra bridge linkway. Notice the road curving to the right. 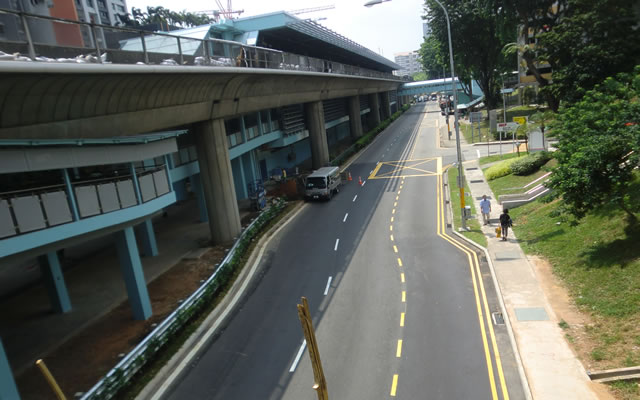 Ramp on the left is for the wheelchair disabled/ babies on prams.
Notice the other bridge linkway further up ahead.

The bridge has to be high enough for double decker buses to pass under. Then peasants have to walk just under the elevated train track on the bridge linkway to the extra entrance/exit. 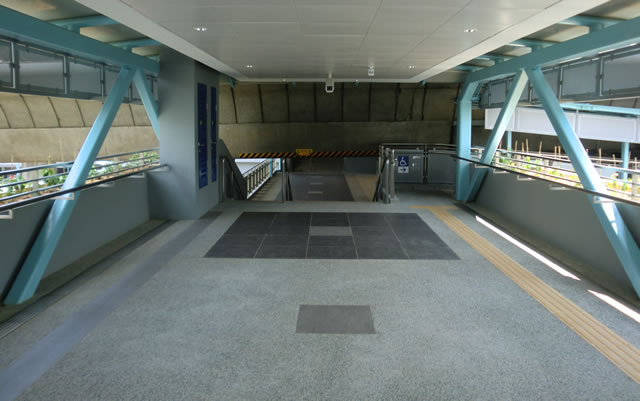 You can see a security camera on the ceiling. Monitor traffic. Detect/deter terrorist? There are plenty targets of opportunity such as infested shopping mall. A determined suicide bomber terrorist can detonate himself/herself on the moving train, blow up a supporting track column or just blow him/herself up on the stairs under the elevated track.

Is a waste spending excessively on defense. A smart enemy would utilize asymmetrical/unconventional methods to cause damage/cripple infrastructure. Why play by the rules of the much richer opponent? The sept 11th 2001 event showed the world how terrorists used 2 hijacked airliners as flying missiles.
0 comments

South Korea held a live firing exercise earlier this month. What shocked me is that they are still using vietnam war era weapons such as F-4 fighter-bombers & Cobra helicopter gunships.

We all know how serious a threat the north korean hermit kingdom is with its provocative shelling & its massive artillery force within striking distance of Seoul.

Yet despite facing a serious threat, South Korea still spend prudently with their defense budget. In the early days of S'pore, we had a prudent defense budget as well. Our AMX-SM13 light tanks were upgraded a few times. Ditto for A-4 Skyhawks instead of buying latest expensive weaponry.

South Korea sent substantial troops to assist the US during the vietnam war. However their subsequent South Korean governments psyche were not affected by greed due to their political structure. In S'pore however, the hybrid regime mutate into the present greedy one.

As greed comes into play, defense spending shoots up. Much of taxpayers $$ are channeled into the government linked defense companies. Hence taxpayers $$ flow into the private shareholders of which the sovereign wealth fund(SWF) benefit the most. There's nothing wrong with keeping the money inside S'pore. Problem is that the SWF lost substantial sums in overseas investments.

How ridiculous is our defense spending?

According to Stockholm International Peace Research Institute, we spend 3x more than South Korea per capita. And we are not even facing a hostile North Korea.

Tax Increases? Just Reduce Defense Spending & Reallocate
There have been rumors about GST 10% should the hybrid regime win the upcoming elections. People question the alternative parties about how to fund citizen-centric policies without increasing taxes.

The answer is simple. If South Korea still have vietnam war era weapons in its arsenal, there's certainly no need for the latest weaponry for this tiny island. With reduction in defense spending, the $$$ can be diverted to spend in discounted travel for our soldiers on public transport, educational grants for financially struggling students etc...

With a 3x difference in spending compared to South Korea, there is certainly room to improve citizen's well-being through reallocation. The key is to have a different political party at the helm. Forget about the hybrid regime changing for the better due to its heavily entrenched self-interest over decades of rule unless it suffer a major defeat the polls.

I slacked a lot in blogging this month. With SG50 & election being announced this month, this blogpost will attempt to highlight what i consider significant about these 2 events.

Throw out so much SG50 hype, how many flags can you see on this photo taken on national day? Does a different coat of paint make more citizens fly the flag? 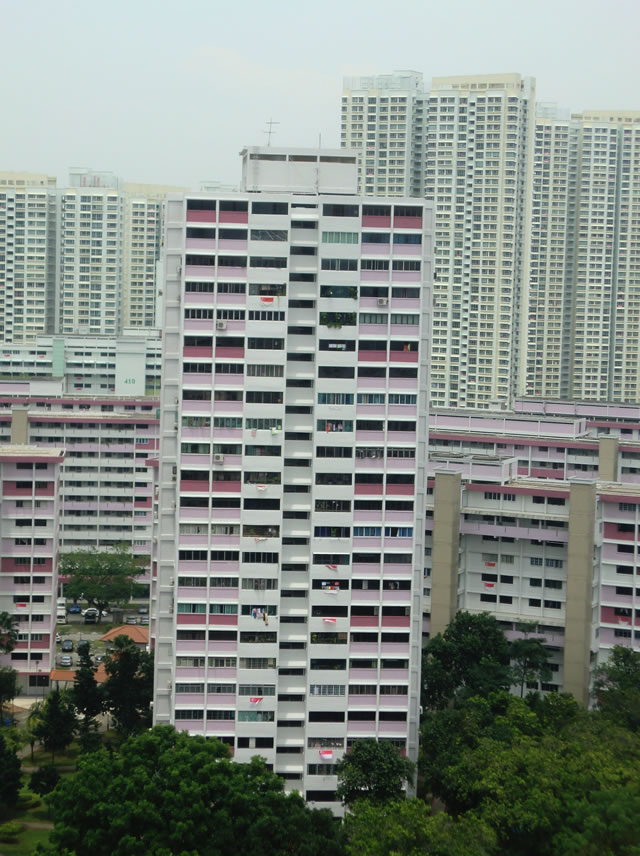 
Before the 50th national day celebrations, hordes of sinkies are leaving the country for a rare 4 day long weekend. It's supposed to 3 days but the hybrid regime declared an extra public holiday & urge the peasants to stay behind & join in the celebrations. 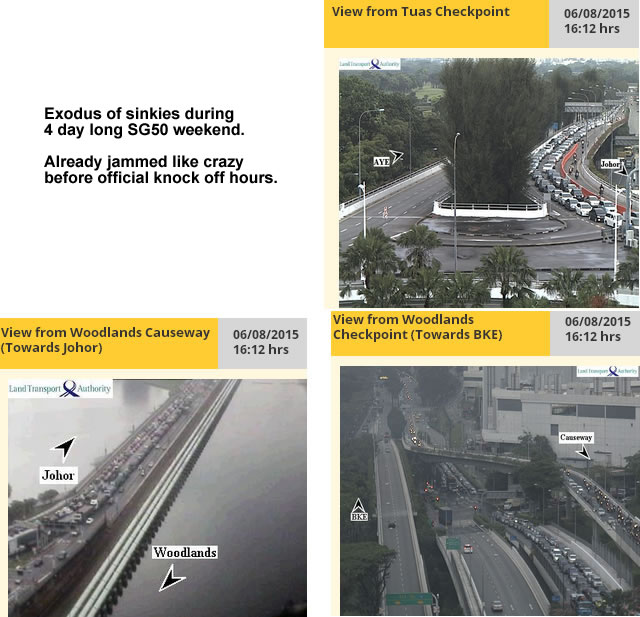 When taking precious leave for a short vacation becomes a terrifying thought with the fear of being replaced by a cheaper foreign worker, the 4 day long weekend provide a nice respite out of the overcrowded island. Only ordeal are the horrible jams through immigration.


Then to the announcement of election 2015 to be held on 11th Sept & their candidates rollout. Which white scums get my blood boiling most? 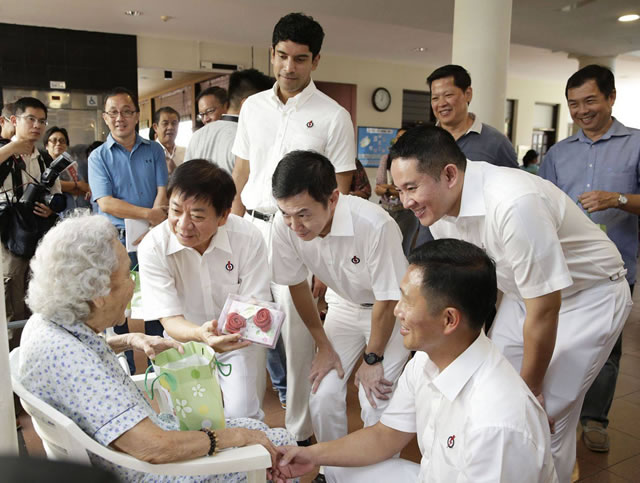 斯文败类 when hospital beds not enough.
My mum & dad(passed away) were victims of insufficient beds.

Coming down from his ivory tower & pretending to empathize with peasants. End up getting easily exposed - his fox tail revealed.

狐狸尾巴漏出来 at 21st second.
Almost said Tan Payoh, then said Toa Payoh mall when no such place exist. Only a normal coffeeshop.
伪君子.


I'm somewhat disappointed that Workers Party is contesting 28 seats which is just 1 seat short of 33% parliamentary seats needed to veto toxic policies. They are playing the safe route to get those fence-sitter voters to vote for them. Why the safe route? The blame is on those daft fence sitters who are kiasu, kiasi(scared lose, scared die) when the rot(some of which i've blogged about) in the country is already staring them in the eyes.

As for the S'pore Democratic Party(SDP), i hope they win at least 1 seat. With 1 seat serving as a base, SDP can then follow the route of WP's initial Hougang base spreading out to capture more.

For the other alternate parties, it is unlikely they would win but it is imperative for voters to decrease the hybrid regime's vote % to as low as possible.
0 comments
Newer Posts Older Posts Home
Subscribe to: Posts (Atom)