How the Mighty Fall(Singapore): Stage 1 - Hubris Born of Success

I have just read Jim Collins' book(2009) 'How the Mighty Fall' & is amazed at the many similarities Singapore has despite the book focusing on companies.

The book is Jim Collins focus on the dark side after his 2 earlier books(Built to Last, Good to Great) focuses on the bright side of what it takes for companies to thrive & be great.

Whether it is empires, companies or countries, the framework of decline can be used for the majority of cases. As Singapore is often called SG Inc by netizens, it makes appropriate sense to apply the framework to Singapore's hybrid regime. Afterall, the hybrid regime is akin to the top management of a company.

Why Success Often Sows the Seeds of Failure
I shall focus on Stage 1 in this blogpost. The seeds of failure are sown according to Jim Collins after the top management fall victim to various forms of hubris born out of success:

This is an important flowchart. Why important? Because we need to note the overlaps.

Collins research has shown that companies often move through the stages of decline in sequence though it is possible to skip a stage. Some companies move quickly through the stages, while others languish for years or even decades. Some stay at 1 stage for a long time & then quickly pass through another stage.

According to Jim Collins, there are warning signs for Stage 1 - Hubris Born of Success. He said that the presence of warning sign/s does not necessarily mean you have a disease, but it does indicate increased probability in that stage of decline.

An analogy i can think of is dengue fever. Having fever might be a normal ailment but if there are other symptoms associated with dengue, the probability of disease shoots up.

Success Entitlement, Arrogance
Success is viewed as 'deserved', rather than fortuitous, fleeting or even hard earned in the face of daunting odds, people begin to believe that success will continue almost no matter what the organization decides to do, or not to do.

So many scholars from the military in the government. Mentality is Yes, Yes, Yes = entitled to success/promotion. Just do without question.

Neglect of a Primary Flywheel
Distracted by extraneous threats, adventures & opportunities, leaders neglect a primary flywheel, failing to renew it with the same creative intensity that made it great in the first place.

The primary flywheel is taking care of the people. After discovering how easy to suck $$$ out of the peasants with state capitalism, they have succumbed into $$$ sucking opportunities.

How can the hybrid regime know the Whys when they are in their ivory towers surrounded by Yesmen & Yeswomen.

They also don't understand the condition of obedient workers have long expired. Yet they still hang on to an education system churning out docile, obedient workers when there's plentiful of such workers in China, India etc when those countries have opened up.

Decline in Learning Orientation
Leaders lose the inquisitiveness & learning orientation that mark those truly great individuals who, no matter how successful they become, maintain a learning curve as steep as when they first began their careers.

Evident in how those elite leaders in their 'command tents aka ivory towers' don't experience & learn from 'the trenches' in public transport, govt hospitals etc to formulate policies. Relying on those Yesmen for fake answers.

In the case of public transport, i don't see how buskers performing at train stations & staff giving out stickers solve the overcrowding problem. Mere gimmicks to a distasteful situation when those top brass don't experience it day in day out.


Putting Oneself on the Line to Learn: 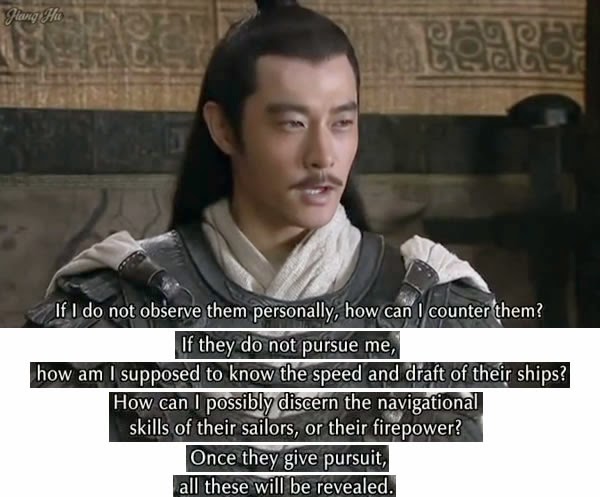 Discounting Luck
Instead of acknowledging the luck & fortuitous events might have played a helpful role, people begin to presume that success is due entirely to the superior qualities of the enterprise & its leadership.

Look at those new hybrid regime candidates successfully being parachuted into parliament through the party brand (though is stinks) & goodwill accumulated by 1st generation leaders. They won't have such luck if is 1 on 1 eg. Tin Pei Ling(PAP) vs Nicole Seah(NSP).
0 comments


"I WAS disappointed to read that there were too few members in a recent Parliament sitting to pass 2 Bills......" - Leong Kok Seng

What an excellent advertisement. So many of our so-called govt leaders 'disappeared'. When the top people disappear, what moral authority do they have over the common people? Will they 'behead' themselves? 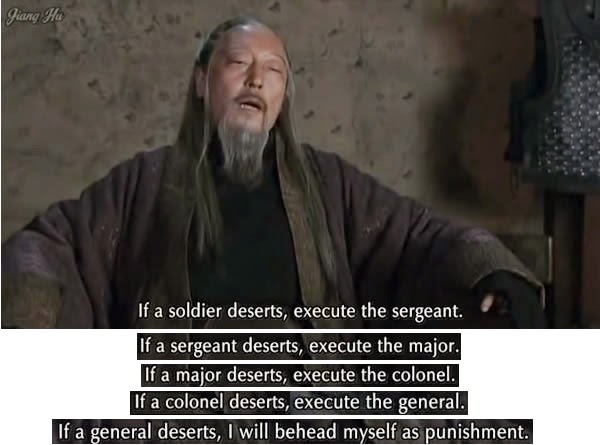 It is laughing stock for him in his ivory tower to think the peasant soldiers are the cornerstone. I have earlier blogged in march that Singapore's Military Morale Is In Disarray. With the hybrid regime's latest advertisement showing their 'good' example last week, how can morale not be in disarray?

Furthermore compounding the deteriorating situation are large numbers of foreigners on this tiny island. Why bother spend so much on terrifying military equipment such as modern day 'catapults' & 'siege ladders'? It mainly benefits the govt-controlled defense companies. 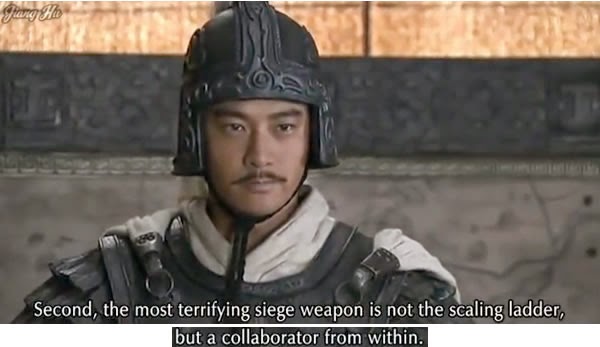 The riot at Little India by foreigners late last year have made our police scrambling for cover. Officers are like deer caught in a flashlight. Around 40% of the population are foreigners. So judging from that percentage how powerful is that number?

IT & healthcare industry have basically hallowed out (not many locals left) leaving vulnerabilities for sabotage. 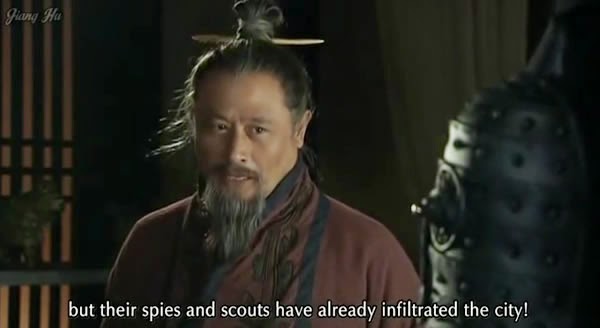 Today it was reported that 7 in 10 NSmen in their 30s fail annual fitness test. Warning alerts ought to have gone off when there's 40%, 50% failures. Yet the situation continues to rot till is now 70%.

A major reason for the massive failure rate is that local guys are overworked. When more foreign workers influx with no reservist obligations, sinkies are literally killing themselves with long work hours to avoid being fired. Upon reaching home, it's late & little energy left to exercise.

As such, i don't understand what kind of cornerstone defense strategy the deputy prime minister is talking about.
1 comments

What happens when maximize profits at all costs mentality trickles down from the hybrid regime?

How Msia's Johor State(transparency) is helping to bring down SG's hybrid regime?


Grow Big(maximize) at all Costs like Cancer Approach
A few days ago, it was reported that OCBC bank pulls plug on Cycle Singapore. It is understood the 'divorce' happened because of a cyclist death.


Bukit Timah Nature Reserve to close for at least 6 months. Even nature reserve can't withstand overpopulation so mishaps are just waiting to happen when the organizer is squeezing as many bodies into the cycling event in order to maximize profits. There's nothing wrong with maximizing profits. What's wrong is there is inadequate infrastructure & medics to support the event. Doesn't it sound familiar like the beds waiting along corridors in our public hospitals because of bed shortage amid overpopulation?

I've never taken part in OCBC Cycle as i consider it overpriced. Overpriced services for fucked up experience is becoming the norm in this tiny island. The latest is exorbitant World Cup subscription fees for fucked up service - Complaints persist over SingTel’s World Cup package.

Supporters of the grossly overpaid hybrid regime like to compare us to other 'lesser countries' & say we ought to feel grateful. I have to say there's no need to overpay for a decent service/experience.

Before the 'OCBC Cycle divorce' announcement a few days ago, an excellent post written early last month on the overpriced & pathetic experience in SG:

Now for my personal experience to addon. Let's compare Sillypore's overpriced cycling event to a free cycling event in JB Arts Festival 2012 just across our shore in neighboring Johor. Too bad they didn't have the event with part of the route winding through JB's old streets(arts) & central business district last year. 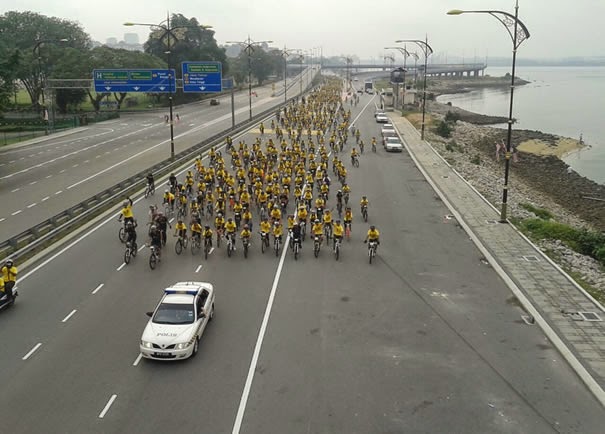 This is Jalan Abu Bakar, the coastal road in Johor, Msia which is opposite Kranji, SG.

When organizers in SG organize the events, police costs, road disruptions(economic losses) are factored into the price of the ticket. Not so in neighboring Msia when they are already paid with taxpayers $$$. 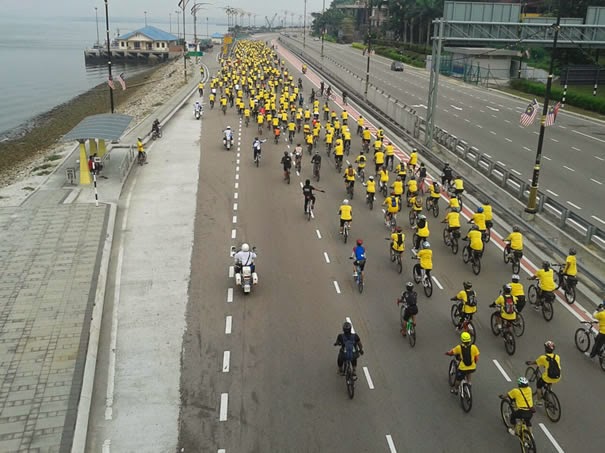 It is a leisure ride with family wholesome goodness when photos of kiddy girl Riding Oversized Bicycle to Save $$$ (blogpost) can participate. Yes, the mum is a safety cyclist but the kid can handle it on her own in the big convoy.

When the traffic police stop traffic for the convoy to u-turn back, the drivers are patient & don't horn. The experience is fantastic & i'm mightily impressed.

Still considering to sign up for next year's overpriced local cycling event if you are a cyclist? It would be better to spend your $$$ in other countries.

Msia's Johor State(transparency) is helping to bring down SG's hybrid regime
Issues about the transparency of SG peasants retirement funds are in the limelight recently. As budget airlines & well just a bicycle ride across the border will expose peasants to other 'lesser countries' higher transparency standards, the overpaid hybrid regime will eventually be dislodged from their dominant power.

Why the hybrid regime is losing & continue to lose:

How transparent is the free cycling event organised in Johor, Msia? I suggest you visit JB Arts Festival Malaysia & click on Festival Report to see it for yourself.

With such high transparency standards from an arts festival just across the border, how can the hybrid regime deserve their obscene salaries with such low standards? Their votes will continue to plummet just like the dissatisfaction over the fucked up overpriced World Cup telecast standard.
1 comments

Transformers: The Movie cartoon made me cry & my 1st MP3 song

I have not watched Transformers 4 yet. Though it was released last week, ticket sales are already roaring worldwide.

If you are a true blue Transformers fan like me, you'll understand why Sorry, Michael Bay - Why 1986's Transformers: The Movie Is The Best.

I was aghast that Michael Bay portray Optimus Prime as a long-nose truck instead the cartoon's flat nose truck. Quite a number of diehard fans are pissed off with the different nose.

2 Things That Made Transformers: The Movie Unprecedented
There is no need for a hot girl like Megan Fox or Nicola Peltz in Bay's Transformers movies to make it great.

A major reason why Bay's TF movies loses out to an old cartoon is the music. The other is that it made me cry when i saw that Optimus Prime died. There are others who cried too......

This blogpost is heavily laden with music videos. To understand the musical aspect, you'll have to listen to the movie's soundtrack in the following clips of the cartoon movie.


'The Touch' by Stan Bush is my 1st mp3 which i downloaded when mp3 format first became available.


'Dare' by Stan Bush is my 2nd mp3 which i downloaded. These 2 songs can keep one 'pumped up'. After listening to these 2 hits, perhaps you'll also want to get them too. I caution not to use these awesome music as ringtones for your cellphone. Why? After enough annoying calls from people you don't like, you'll associate these awesome songs with those annoying calls which will ruin the experience!


Hunger for more? The next song happens to be 'Hunger'- 4mins

You can see the Dinobots showing the Sharkticons who is boss. The Dinobots which are created by the Autobots have simple brains. It is their simple brains which make them adorable.


If you have not watched the cartoon movie, after watching the above music videos featuring its soundtrack, you already have some rough idea of the cartoon movie's plot & why it triumph over Bay's TF movies.