Although i'm an asian brought up in an asian family, I subscribe to the western thought where people tend to think about working less when they have achieved sufficient levels of wealth to be able to live better. Trading riches tomorrow for comfort today. Taking more vacation time to relax.

S'poreans have already reached a decent standard of living in the 90s. What's the point of the govt growing gdp at all costs like cancer? Look at the horrific costs so many pay...

Stress
Many consider investing risky. I would say it's far more risky being killed by stress from work dragged on for years. People need to ask themselves at times if they are working hard at the right things. Someone else might be working at changing 'the game' which renders the hard work done irrelevant/ineffectual (rules changing aircraft carriers rendering hardworking battleships sort of useless during WWII).

Dollars Earned Per Hour
- 60% reported they stay in office for at least 1 hour after work hours at least 3 days a week.


Higher earners have more workaholic tendencies:
Many of those higher paid wage slaves have to stop deluding themselves of their higher salary. For accurate measure, throw in their extra free hours at overtime rates to get total hours. Then divide total hours by salary.

Higher earners tend to have more 'toys' to maintain. Ever seen a general manager taking bus to work? Making & streamlining their work to make themselves replaceable is a nightmare for them considering the bigger mortgage & other bills for their toys.

Bullying
I thought the freshie young workers are most vulnerable to being bullied. Looks like the govt policy of opening the floodgates to younger cheaper foreign workers has made the aged(& expensive) 41-50 Pa Pa, Ma Ma, Uncles & Aunties most easily bullied.


Common Bullying Behaviors:
Excessive workload--> More stress--> More bullying. The gdp obssessed govt likes to talk about productivity growth. How can workers be productive when so many are zombies & 'bochup'?


Those scholar elites running the govt ought to look at the Nordic countries which their economies are still competitive with their populace having leisure time to enjoy. Leave some of the resources to others so they can achieve a better quality life. Do the scandinavians work themselves to stress & death in pursuit of more, more & more stuff?

Here are some of the episodes not available from chocobullet's channel i recommended:

IceBreakers
http://www.youtube.com/watch?v=F95wO1-flM0
I didn't know icebreakers are nuclear powered too. It makes sense since there's no way to refuel for a ship hacking through miles & miles of ice.

Burj Dubai Skyscraper (part 1,2,3)
http://www.youtube.com/watch?v=ndCa12GEpb0
2x height of World Trade Center. How do people get out during an emergency?

Ferriss Wheel
http://www.youtube.com/watch?v=BcZXvHrkb34
S'pore Flyer currently is world's tallest. It will soon be overtaken by a bit bigger wheel in Las Vegas. It gets interesting when we compare it to the tallest wheel it replaced.

Star of Nanchang
S'pore Flyer
I've not taken a ride on the Star of Nanchang. 21x more expensive in construction cost for S'pore flyer which is 5m higher. This is another illustration for the frickin land cost. The views from S'pore Flyer can't possibly be 10x better than Star of Nanchang's let alone 21x.

Again this boils down to what value we get in paying high bloodsucking rents to the landlord for the stuff we buy in S'pore. My wallet is shut tight for many things in S'pore.
0 comments

2012 is another achievable year of not watching any tv programs. I enjoyed engineering documentary Big Bigger Biggest as it tells feats of engineering from its evolution.

Like in Surviving D-Day which i thoroughly enjoyed, the use of real-life experiments to illustrate concepts to viewers is remarkably well done. As of this writing, i've watched:

- Aircraft Carriers
Night landings on a moving ship with angled deck is darn difficult. That's why they are called naval aviators & not pilots.

- Railways
How the Paris subway lines & station are built beside the muddy Seine river is impressive.

- Submarines
How long does the oxygen last in the 1st submarine invented?

- Canals
How the Panama Canal is built & how it works.

- Bridges
The japanese have perhaps the most expertise to ensure safety in typhoon, tsunami & earthquake prone Japan. The chinese are a force to be reckoned with too - look at the chinese bridges on the list longest suspension bridge spans.

chocobullets' YouTube channel has most of the episodes. You'll have to query Big Bigger Biggest to search for the other episodes.
0 comments

The pictures went viral online & i laugh my ass off upon seeing it. For many guys, the stage of being a conscript open one's eyes to these type of 'acting' whenever senior officers are coming to take a look. I'm not sure about outside s'pore but many letters/replies to public by CEOs in govt-linked companies who are ex-generals are often written by their minions.

People in higher positions in society are often shielded from realities on the ground by their boot licking minions. 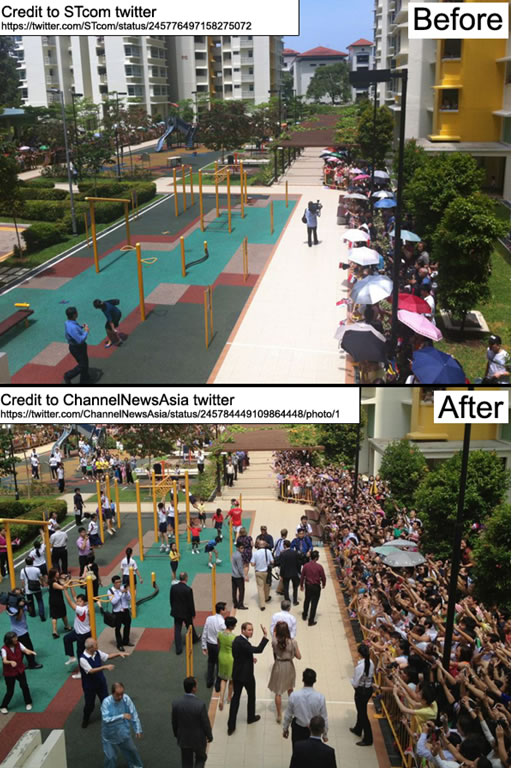 2.5mths Duration is not Investing. Is Trading

Invest? Duration is 2.5mths & they call that investing? What a misnomer. Is more like trading to me.

I saw stockwhiz promotion by S'pore stock exchange on back of envelope from my stock brokerage firm. Such a short time frame forces people to look for short term gains.

My first foray into the stock market is trading. Lost a sum. Investing is what works for me. It may sound ludicrous but it is sitting tight & doing nothing after buying during a recession that makes me the most $$(of course must sell).

Sit tight & do nothing is very hard as we have been conditioned to 'do' something. It is a radical shift in mindset. One has to think of being paid to wait & being paid for the opportunity to show up. In the fast pace world of email, instant messaging, sms for quick results it is even harder to wait & wait & doing nothing for many people.

At times sitting with cash & doing nothing is the best action to take if the odds are not in favor or opportunity is not ripe yet.

This is What is Called Fasten Your Seatbelts During Landing Approach

Watch the banking of the 747 as it makes a sharp turn to line up for final approach (1min 23s):

I have not been to HK before. This is what gives meaning to fasten your seatbelts during landing approach at HK's now decommissioned Kai Tak airport. As we can see the plane is too right just seconds before touchdown & pilot rudder left the plane to touchdown at centre of runway. Is suicide to bank the aircraft to turn left when the altitude is just couple of metres.

You might be wondering how come the plane don't land from opposite direction. I'm not a pilot but we can see there are hills further inland & the cameraman who filmed it is on a small hill. Danger from landing from sea is that in event of aborted landing, there's not enough airspeed left to overcome gravity & clear the hills for another retry.

I laughed when i read the minister's worklife balance message to those dumbass employers:


"If you have a market that's stagnating or is getting smaller, it's actually not good for business because your market is smaller, your business will shrink & your pool of labour also will shrink over time. So they have to see that in the context that it is important for us to also look at the future as an employer."-Minister in Prime Minister's Office Grace Fu

The pro alien party is responsible for opening the floodgates to a tidal wave of migrant workers in bid to grow gdp at all costs like cancer. Now with the warning of 'folding up' if sinkies do not reproduce, the pro alien party is rolling out the measure of enhanced parental/paternity leave in bid to reverse the pathetic fertility rate of 1.2

I consider it a lameass measure which would fail much like the measly few ¢ discount to encourage early bird train travel to alleviate rush hour congestion. When there are so many foreign workers with no family &/or few friends they can work long hours. Sinkies sacrificing their social/family life to work long hours to keep their asses from being replaced are literally killing themselves. I first encounter the nasty experience when my superior gave me a poor grade during polytechnic job attachment.

What kind of future is there working for those idiotic bosses who are pa pa, ma ma, uncles, aunties who can't even see the big picture (now need govt's message)?