From Banner's Typo
The first spelling mistake to catch my attention was the Xmas & New Year banner which surfaced online last year.

Marry instead of Merry.
'Splendid' advertising.


It led people to wonder what kind of cheap foreign worker the winning bidder employed? Such a simple word that even a sinkie with primary school education would know the correct word is Merry. We can see that nobody cares. No checking as it goes to the printers to the people putting up the banner.

To Leaking Roof & Grass Problem at Expensive Stadium
Then we have the opening of the S$1.87B national stadium. The hugely expensive stadium though expensive is likely to be won by the cheapest bidder as is often the case for govt-contracts. New stadium was plagued with grass problem & a leaking roof.

Again what kind of advertising message being sent to the outside world?

To Typos at SG Exhibition at Museum
Then i have my own experience of seeing it with my own eyes as i go to the National Museum after the Philatelic museum since they are close to each other. It was reported last year around the opening of the exhibition that Showcase of S'pore history marred by typos, errors.

Again the workers involved such as museum staff, printers, setting up etc are bochup, bochup & bochup. There's something wrong with the management as the staff are 'bochup'. It took a Briton visiting the museum to point out the mistakes. 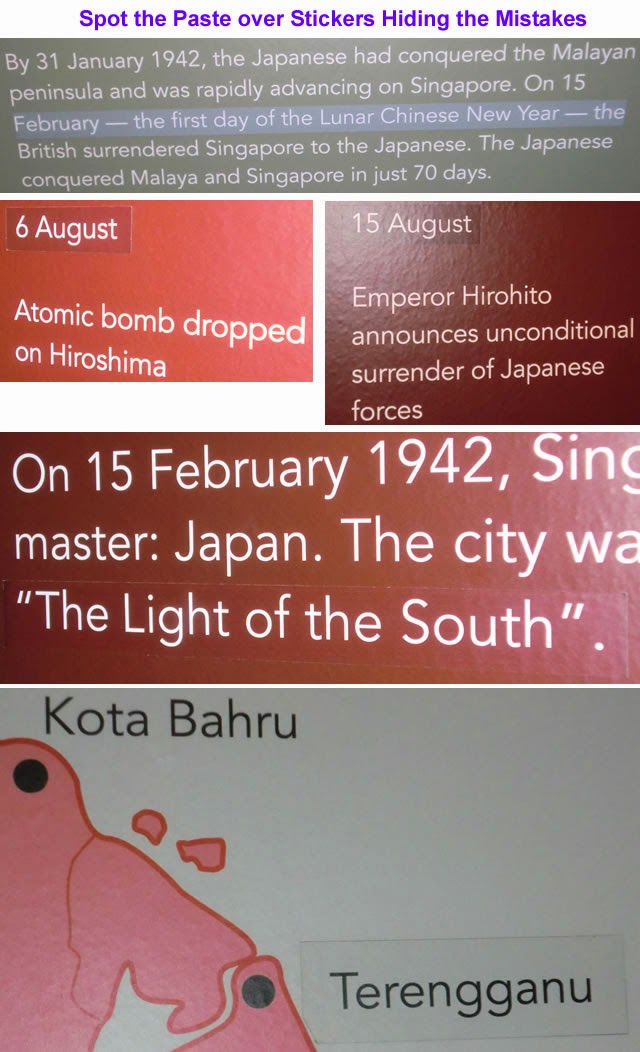 These mistakes are spotted at the WWII section of SG700 years exhibition at the museum. I may have missed out the pasted over corrections at the earlier periods as i walked through the exhibits corridor but the WWII section sounded the alarms for me.

What do these mistakes tell you? Well it tell me it is highly likely to be done by a foreign worker.

SG surrendered on 1st day of Chinese New Year
How likely is a sinkie not to know this easy to remember fact? Alarm bell - likely done by a foreigner.

6 August
1st atomic bomb is 3 days before Nagasaki bombing on the 9th which is SG's national day. Pretty easy to remember.

15 Aug
Japanese emperor announces surrender. Ok i don't remember this date. With wikipedia today, the fact can be easily obtained without the outdated memorizing approach still taught in schools.

Terengganu
Ok we can sort of rule out malaysian workers as how can they don't know how to write their 'Terengganu' state.


With the clues of these pasted over corrections, i would deduce that the work is done by a non-sinkie & non-msian.

This kind of work can't be done by a sinkie being paid decent wages? Must rely on cheaper foreign worker & end up spending more to fix & time wasted?

How to inspire confidence with these kind of advertising to foreign investors, tourists & locals with the way the current hybrid regime is doing things?