Sinkies Least Positive in World After Most Emotionless 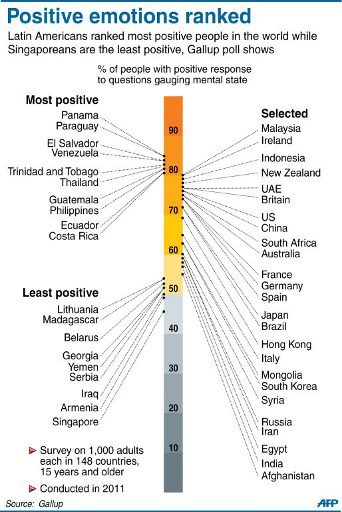 Workers in other countries can crush the workers in S'pore very easily.

Past few days have seen a flurry of reports about the "much vaulted S'pore workforce". I love the polls by Gallup(independent). It is helping to 'awaken' the sleeping masses indoctrinated about gdp growth by the ruling hybrid regime.

Growing the gdp at all costs like cancer by the million $ salary scholar ministers has produced:


Summing them up as follows:


1 in 5 workers fake illness to get an MC, headache most common excuse
Many workers in S'pore have 14 days of annual leave or less. Coupled with long hours--->burnout. MCs are an outlet for employees to avoid using the precious 14 days which are usually reserved for vacations.
Bus drivers hired from China by SMRT for their cheap wages encashes their annual leave for $$$. It is the same for lowly paid sinkies & i've done it as well when living costs are rising relentlessly. I was burnout at end of year without taking any MCs nor annual leave.
Smart bosses would reward workers for not taking MCs every month. It causes less disruption to work processes & staff morale.
More employers offering work-life arrangements
"Recently, there have been some reports that S'pore is the least emotional country in the world, and that S'pore workers are the most unhappy. So, I think companies need to go down to the root of all these & find out how best to reverse the trend"-Ronald Lee

Is utter pathetic that working part-time is considered as work-life arrangement. In this internet age, tele-working ought to be more to elevate time wasted in traffic jams, pollution & congested lunch crowds.

5, 5.5 or 6 days is not an accurate indicator. No. of hours work should be. No point having a 5 day workweek when the workers is approaching burnout working 10hours a day.

70% of workers intend to change jobs next year
1st quarter = crowd mentality. It is the period when competition is strongest.