Chronology of events:
Being a peasant who escape to Johor Bahru at times to stretch my dollars further, i need to take Johor's buses to travel. I came across their ad for bus driver recruitment for Causeway Link: 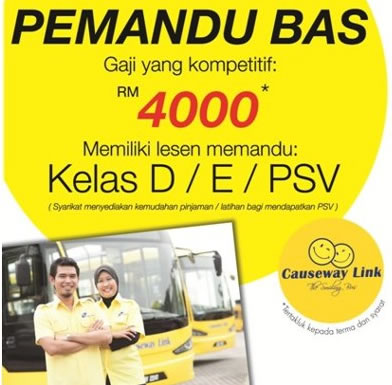 I'm not sure if RM4,000 includes overtime pay but it is apparent the salary is not alluring enough for Malaysians otherwise the SG govt-lniked companies wouldn't have to recruit cheaper drivers from China.


Wage suppression is not confined to bus drivers alone. Hordes of sinkies are suffering wage suppression with the govt's massive influx of cheaper labor to boosts its govt-linked companies profits at the expense of the natives. I'm using bus drivers as example as people are already familiar with the explosion of the 'strike by drivers hired from China'.

No Sustained Demand in Sillypore

"One's own employees ought to be one's own best customers. Paying high wages is behind the prosperity of this country"-Henry Ford

Remember what Henry Ford said. With widespread wage suppression coupled with relentless rising cost of living, how can there be prosperity in Sillypore when there is no sustained demand from sinkies?  Is a precarious state as the demand is artifically propped up by massive influx of foreigners. When they leave enmasse, it is 'depression' for Sillypore.


Pro Alien Party being thrown out by suffering sinkies in Punggol East by-election is a good start. More elites of the Pro Alien Party must be thrown out via the ballot slip in 2016 before these elites make life hell for the peasants.