17 years to complete Cross Island line. Announced just after the nomination of candidates for the By-Election of Punggol East. Seems like a desperate bid to placate those 54% who voted for them in that area in the 2011 election.

Chengdu's first 2 metro lines took around 5 years each to finish construction. In Sillypore is 17 years. Even an interior western city in China is more effective in public transportation planning & construction than our obscenely overpaid ministers. 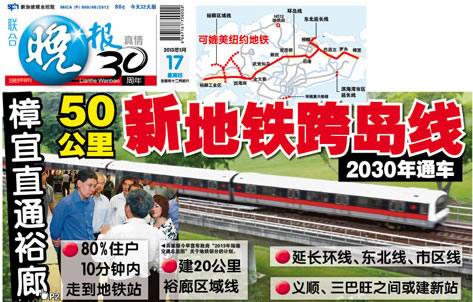 Their announcement to shore up votes did more damage by telling people they need 17 years to finish building a line when infrastructure in this tiny island is already bursting at the seams with relentless influx of people to shit, shit & shit so they can buy more toilet paper to boost GDP at all costs.

Clementi where i now live is going to be one of the interchanges along the Cross Island line. I would say it would be underground at Clementi for that line. There isn't space left for another line in the current above ground station at Clementi.

- Appreciate Golden Age of S'pore from Train in 1991