KSL Mall on Weekday at Lunchtime

1st visit to this mall in JB, Msia is shortly after it opened its door early this year. Nothing much has changed except for the opening of supermarket Tesco at the mall during my recent 2nd visit.

I took a bus at bay 4(if i remember correctly) at Sentral to the bus-stop opposite Plaza Pelangi as i was going to fix a dental appointment at a clinic nearby. Medical costs are frickin expensive in S'pore. Initially i intend to wait for the KSL bus but since another bus with signage Plaza Pelangi displayed i simply boarded it. Bus fare is same at RM1.30

Isn't it refreshing to stroll around with not much people during lunchtime compared to 'locusts-filled' malls in S'pore? 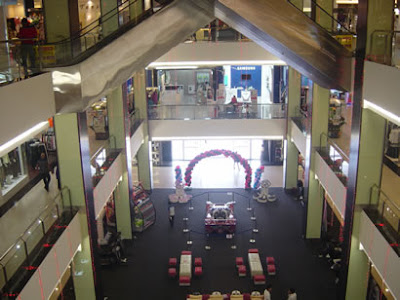 Dining area outside 2 restaurants(below photo) during lunchtime. Malaysians seem like a frugal bunch compared to us S'poreans many of whom pack & devour food at restaurants like never eaten before. I had my lunch at a coffeeshop outside the mall for a laidback atmosphere & easier on my wallet.

With less people walking & hurrying around, time just seem to pass slower compared to hectic S'pore. I usually turn off my cellphone during daytrips to JB, Msia to prevent unnecessary charges & also to "disconnect" from the grid from time to time so as not to be addicted. 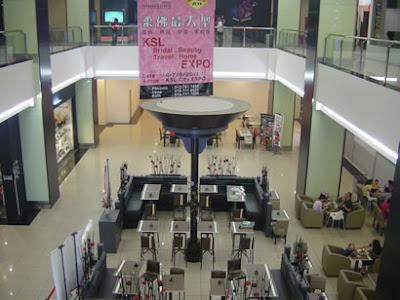 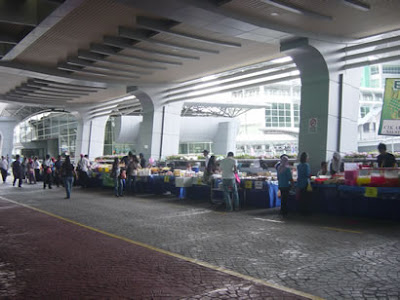 Took KSL bus to return back to JB Sentral (RM1.60). However i head to City Square Mall instead for the bookstores to check out what are the new books. Books that are banned in S'pore by the govt are good sellers over in JB for obvious reasons.

There's a street market(above photo) for the muslim fasting month just outside the road of JB Sentral before is home sweet home again by clearing the customs complex behind.