2 white Mercedes involved in a very minor accident at a cross traffic junction near Clementi mrt that disabled the middle lane traffic.

However what intrigued me is not the car accident but the admirable Ang Mo (colloquial term for caucasian) carrying his CPU tower with 1 hand while riding a bicycle with other 1 hand on slick tires! He has another friend riding with him as escort. I saw them stopping at the cross junction near Ave 6 to rest his arms before moving on.

Whether the tower he's carrying is empty is unknown but i do admire his ability to pull off the feat. In s'pore i've yet to see any locals do such a means of transport. Part of the reason can be attributed to 'face' too as indicated in previous post 'Rich Son Poor Son'.

There is still the stigma of bicycle as a poor man's transport here in S'pore although cycling is increasingly popular as a sport. 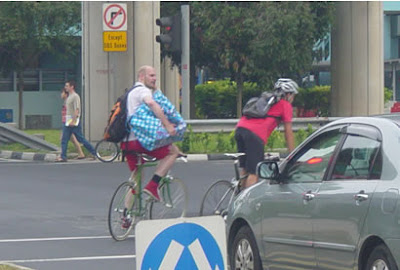 Ang Mo turn his head & look at the Mercedes accident as he ride across the road.