Joined another group's improuptu night ride. Lim Chu Kang road stretching into Kranji area overlooking JB, Msia is a quiet stretch which i like though is not advisable to ride alone. An extra break but shorter one in between to let slower riders catch up is my preference over 3-4 cigarette duration breaks in another ride. 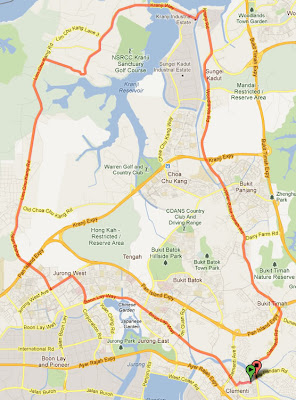 I have mentioned earlier about the exorbitant ride fees for OCBC Cycle 2012. The participants this year compared to last year have increased but is mostly due to addition of kids categories. I sense the event has peaked in terms of participants. After reading the comments of those who participated it seems the route this year is better. 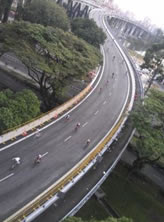 Highlight is probably the Benjamin Sheares bridge. Such event attracts mostly the competitive or those wanting to experience their maiden ride in this event or those who like to ride with many many cyclists. I'll still give this sort of events a pass. $$ is better spent on Msian rides.

Riding up the slope(hard time) of the bridge is an area that separate the weak from the stronger riders. Is akin to you don't know who your real friends are until you are in hard times. Hard times are not necessarily bad, it gives us an opportunity to test one's character.