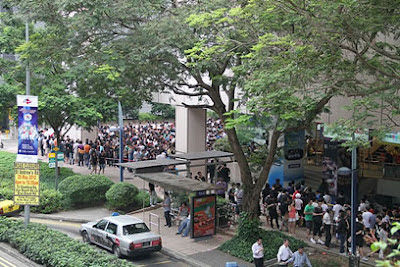 Although i would very much like to play Diablo 3 having played Diablo 1 & 2, i find it absurb to waste one's life in ridiculous queue to get a pre-order copy at launch day on tuesday. I loathe crowds. Many stores are out of stock & i'm waiting for restocks. Game can be downloaded from the game company at S$90 but it is cheaper to get the retail copy which i read in forums is selling around S$75-$80.

Is funny that the digital version sold via downloads is more expensive than retail box version.

There's no harm waiting for a couple more days for restocks. Game servers have already been overloaded on launch day & had to be shut down for 2 hrs for maintainance.

Moreover i'm more of a solo play so as to delve into the game story instead of multiplayer with others & rushing through. Game will not go away anything soon. It'll remain for a couple of years for this high replayability game of 5 different character styles. Same thing as in investing in stock market. Market will still be around. Refrain from letting emotions lead one into a rush resulting in waste of time & $$.