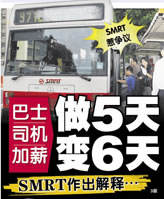 Earlier on the govt controlled public transport companies announced a 35% pay raise for bus drivers. Good news for the lowly paid drivers ($1200 --> $1625). However it was now revealed that they have to work 6 days instead of 5. What exactly is the total no. of working hours is unknown to me. Makes one wonder if is really a raise.

If you look at the pathetic salary of the drivers compared to the frequent fare hikes of public transport it is apparent the vast bulk of profits went into govt coffers.

Good pay for punishing long work hours is not necessarily a good thing. The person pays for it through lack of exercise, lack of social activities & stress. Then the person having aged spend their $$ trying to repair the damage (sick body) they did to themselves earlier on. With vast influx of generally cheaper foreign workers by the govt, many sinkies are killing themselves working even longer hours in order not to get their asses fired.

In S'pore it is common for many unhappy workers to incur extra expenses in retail therapy for a short dose of short term happiness in a purchase.

Minus this expense minus that expense + punishing work hrs ---> Many sinkies pay a high price to survive in high cost tiny S'pore with no countryside to retreat/destress to.